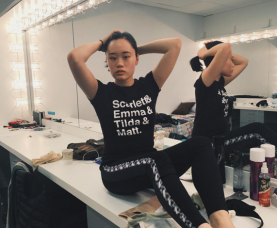 Michele Selene Ang, one of the stars in Netflix's "13 Reasons Why" series, has become the subject of a viral T-shirt campaign. According to the Los Angeles Times, the T-shirt takes a stand against Hollywood's whitewashing problem.

The T-shirt features the names Scarlet, Emma, Tilda and Matt, which is an attack on Hollywood casting Scarlet Johansson, Emma Stone, Tilda Swinton and Matt Damon in "Ghost in the Shell," "Aloha," "Doctor Strange" and "The Great Wall," respectively. These roles were originally written as Asian characters.

Comedian and performer Will Choi created the T-shirts to make a statement about these ongoing problems in the entertainment industry.

“The purpose of [the shirt] was to address the whitewashing issue in a comedic way," Choi told the Los Angeles Times. "Hollywood just needs to try a little bit harder to include us in stories that take from Asian elements. You’re using our culture as set pieces or accessories, and that is unfortunate. I hope things will change."

Thanks in part to Ang's endorsement, it looks like the T-shirts have succeeded in sending a message to Hollywood.

Decoration Diaries: How One Distributor Wowed His Client With a Branded Apparel Kit
Comments
The Top Lists