Atari's First Piece of Hardware in Years is a Bluetooth Hat

Hey, video game fans! We have exciting news: Atari is back!

What? You were expecting a new video game system, or maybe re-mastered versions of some of your favorite classic games?

Well, it's not a new video game system, but it's pretty exciting that Atari is getting into the wearable technology game with a new cap that features speakers embedded in the brim. 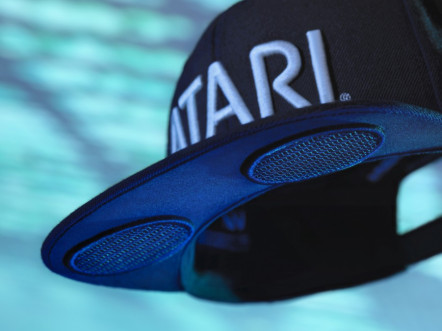 The users can connect to the speakers via Bluetooth, and the hat has a built in microphone for cellphone calls. It's an interesting combination of wearable technology and smartphone integration, and comes with the well-known Atari branding for a bit of nostalgia, as well.

What's even more exciting is that, if this trend catches on, the hats connect to other nearby hats, so groups can all listen to the same thing at the same time.

It looks like a regular hat, save for a few small speakers in the brim, but Atari told Alphr that the plan is to eventually get the technology to a point where the speakers are completely invisible.

Don't expect to see the hats in public just yet, as Atari is still looking for people to test the beta development. The company also didn't list a price yet, but estimated the test bundle (which comes with the hat, a T-shirt, and a copy of Atari Flashback for PS4 or Xbox One) will be worth about $300.

Maybe someday we'll be able to play Pong with hats, too.