Anything can be a musical instrument. Remember in elementary school music class when you’d make instruments out of things like rubber bands, tissue boxes and paper towel rolls? Technology has come a long way, and now all you need to create high quality music is a smartphone and a box of Reese’s Puffs cereal.

Reese’s Puffs is releasing three limited-edition boxes that customers can scan with their smartphones to unlock an augmented reality synthesizer. Each box has a different setup, meaning they can layer the Crunchy Drum Machine, the Creamy Lead Synth and Chocolatey Bass Synth boxes to create a fully fleshed-out song.

move over surgery on a grape, we made a drum machine and synthesizer on the back of a reeses puffs box. pic.twitter.com/MvRP7u9lo2

Once they’re happy with their opus, cereal fans can share their work via brand-inspired music videos on social media.

For the more technologically savvy and ambitious customers, General Mills is releasing a real synthesizer called the RP-PRO, which is designed and branded to look like a Reese’s Puffs cereal box covered in cereal and Peanut Butter Cups. That one will get sent to a select number of fans and “top musicians” as a tie-in with (you guessed it) Travis Scott. (Coincidentally, they teased it with a Meek Mill reference...)

Hold on wait a minute, y'all thought we were finished? 👀 Get ready. #PuffsFX pic.twitter.com/0dYAkboaJl

This is a hugely creative twist on the classic back-of-cereal-box games. In the pre-smartphone era, it’s all kids had to entertain themselves at the breakfast table. Now, rather than admit defeat to screens, General Mills is bringing the back of the box to the digital age.

“As a kid I was obsessed with reading the back of cereal boxes,” Josh Fell, partner and chief creative officer of Anomaly LA, said in a statement to Marketing Dive. “Word search? Searched. Maze? Solved. Over and over. We realized our box can be more than that. It can be a canvas for creativity. Not joke creativity. Legit musical expression.”

Having three separate boxes for different synthesizers means that the promotion isn’t a one-and-done thing. You have to repeatedly buy it, or at least buy all three at the same time. Also, the augmented reality technology and incentive to share through branded videos creates a partnership between physical marketing and social media.

Add to that the inclusion of big-name artists like Travis Scott and Lil Yachty, both of whom have worked with General Mills before (and Travis Scott with everyone else), and you appeal even more to a younger, social-media obsessed demographic.

Speaking of that demographic and cereal, Cinnamon Toast Crunch is running a branded merchandise sweepstakes that it says is exclusively for its teenage fans.

Finally, something just for the teens!

Cinnamon Toast Crunch fans aged 13 to 18 can go to Cinnamogistics.com to see how the Cinnamoji mascots are messing with the delivery logistics of this branded merchandise, hitting a little too close to home for people who actually have to deal with that issue right now.

If those crazy characters actually manage to navigate the supply chain and mail system, winners will receive a branded box containing things like socks, T-shirts, bags and more.

“While most contests and sweepstakes are for adults, we made sure this program is just for teens,” Mindy Murray, senior marketing communications manager for General Mills, said in a press release. “That’s right, no grown-ups allowed. At the simple click of a button, teens have a chance to try their hand at receiving these goodies delivered right to their doorstep.” 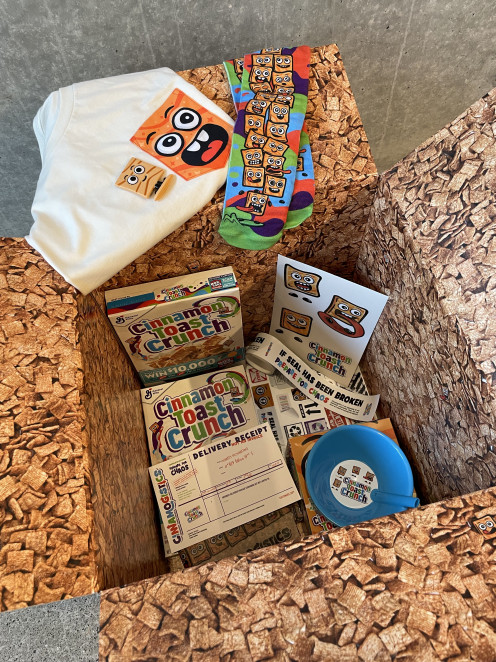 It’s another well-thought-out promotion that focuses on online interaction with the brand (on a daily basis, if they want more chances to win), the promise of physical goods, packaging-as-a-promo-product, and reaching customers without the need to host in-person events.

Let’s just hope there’s no shrimp in those prize boxes.