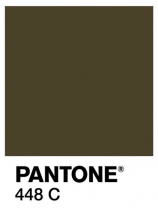 We all have our favorite colors. Some of us even have our least favorite colors. Australian researchers have taken their opinions of the various points of the color spectrum a bit further by not only naming what they believe to be the "ugliest color in the world," but by using the color's lack of appeal to dissuade people from purchasing tobacco products.

Metro U.K. reported that the not-so-sought-after honor of "ugliest color" went to Pantone 448C, known as "Opaque Couché," which is an earthy brown color.

Researchers believed that using the sludgy color on packaging for tobacco products could discourage Australians from purchasing cigarettes.

The process began in 2012, when the Australian government asked researchers at Sydney, Australia-based Gfk Bluemoon to design new packaging for cigarettes that would be so unappealing that it could cut down on purchases.

More than 1,000 smokers took part in multiple studies over the course of three months to identify a color that they found unappealing enough. In addition to Opaque Couché, participants also named lime green, beige, white, mustard and dark gray.

After implementing the color on tobacco packaging, other countries, like the U.K, Ireland and France, have adopted the repugnant (or perhaps just misunderstood) hue as well.

This is in stark contrast to the usual model of creating packaging and advertisements. By doing this, the researchers effectively have created a marketing campaign that does the exact opposite of usual promotional campaigns. Have you ever seen another example of these anti-marketing campaigns? Let us know what you think in the comments.

California's New Plastic Packaging Law Is the Strictest in the U.S.
Comments
The Top Lists