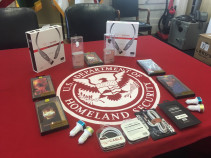 U.S. authorities seized about $1.2 million in fake phone accessories and power adaptors at the Port of Charleston. (Image via CBS 5)

U.S. Customs and Border Protection found about 85,00 counterfeit mobile phone accessories and 38,000 power adaptors shipped from China to the Port of Charleston.

According to CBS 5, the officials confirmed in March that the items, which left China in January, were counterfeit.

"There were some red flags," Customs and Border Protection supervisory officer Brett Mueller told CBS 5. "Maybe it was counterfeit, maybe it wasn't. Definitely worth a closer look when it got there."

The authorities took the items to a warehouse to examine them, and noticed grammatical errors on packaging and misspelled logos.

"I think Bluetooth would spell tooth correctly, but they did not on this packaging," Mueller said.

"The Federal Communications Commission indicated to us that they did not authorize this manufacturer to use their mark," he said. "Who knows what happens when you plug this thing into your car and then you plug your cables in? Does it spark? Does it shock you? Does it start a fire?"

The total haul was valued at $1,192,131, and was originally intended to go to convenience stores in South Carolina.