Chinese clothing manufacturer Tianyuan Garments Company is opening a new factory in Arkansas next year. And, rather than staffing it full of garment workers to make the products, the factory will be staffed with Sewbot robots and their "human supervisors," Fast Company reported.

When running at full capacity, the company's 21 production lines will be able to pump out 1.2 million T-shirts annually. The kicker, because of the low amount of human resources, is that the company can manufacture in the U.S. and still compete financially with companies that import from low-wage companies like China and Vietnam.

The robots, created by SoftWear Automation, were developed at Georgia Tech's Advanced Technology Development Center over the last 10 years using grants from the Defense Department. By 2015, the robots were capable of making bath mats and towels, but have since moved on to apparel, like T-shirts and jeans. 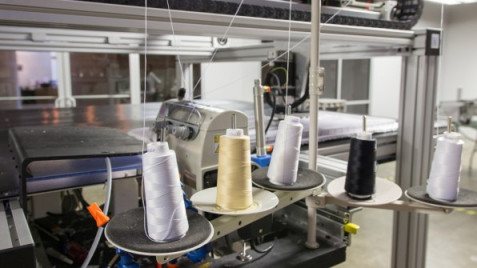 The key innovation in the robots is their ability to use computerized "vision" to analyze fabric and move the materials while sewing them together. They're designed to mimic the work of human workers.

"What we did was approach it and look at it from how a seamstress actually operates," Palaniswamy Rajan, CEO of SoftWear Automation, told Fast Company. "The first thing they do is use their eyes, and based on their eyes, they do micro and macro manipulations of the fabric with their fingers and hands, and elbows and feet. So a robot replicates all of those functions."

For now, the company is focusing on T-shirts because of their demand and relative affordability.

While some might fear that this could replace human workers, Rajan stressed that some items could never be created by automated systems. He specifically cited bridal dresses as something that a robot could never make.

Because of this, the robotic development could shift the way human workforces are used in textile manufacturing. In addition to hiring human overseers, it could cause textile workers who have traditionally created low-cost items like T-shirts and jeans to focus their attention on more complex projects. By doing so, it could force factory owners in low-wage countries to give workers a more livable salary.

From the U.S. perspective, this brings about a few big opportunities. First, the price is attractive, and companies can increase profit without having to outsource manufacturing to facilities that may not pay a decent wage or meet safety standards.

Because they aren't outsourcing, turnaround time becomes much faster. Clients get the items fast, and they get them for cheap.

Finally, the items they receive have one distinguishing feature that stands out in the promotional products space: a label that says "made in the U.S."