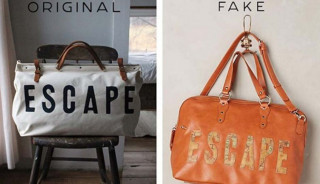 The side-by-side comparison of the two bags. Forestbound on the left, Anthropologie on the right; Image via Philadelphia Magazine

Alice Saunders, a bag designer based in Massachusetts, is claiming that Anthropologie (a subsidiary of URBN Inc., which also owns Urban Outfitters) stole one of her designs, and is producing it with chemicals that require a disclaimer of harmful chemicals in California due to Prop. 65.

According to Philadelphia Magazine, Saunders, the designer behind Forestbound, posted a side-by-side comparison on Instagram of one of her bags and the one Anthropologie sells. Both bags feature the word "escape" in large capital letters.

While one might claim that it is simply a case of parallel thinking, it's interesting to note that Saunders has collaborated with Anthropologie in the past.

Another major detail of this case is the fact that the original design is made from canvas, while Anthropologie's is made of polyurethane vegan leather, otherwise known as "pleather." Due to California's Prop. 65 (formally known as the Safe Drinking Water and Toxic Enforcement Act of 1986), Anthropologie had to report that its bag contains chemicals that may cause cancer or birth defects.