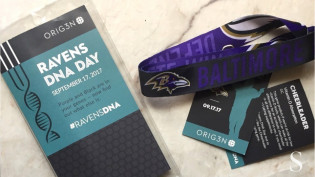 Remember the Baltimore Ravens' DNA test giveaway? Hopefully none of our Baltimore-area readers were planning on going and receiving one, because the team put the promotion on hold for the time being after receiving criticism from local medical professionals.

The decision to hold off on the giveaway, which included a DNA testing kit from ORIG3N that tested for things like athletic ability and vitamin deficiency, came about two-and-a-half hours before game time, according to ESPN.

After a critique from a University of Maryland medical professional, ORIG3N argued that its product is effective, and that some in the medical field might be overreacting. But, ORIG3N now is "working to address questions from officials from the state of Maryland."

"We received an overwhelmingly positive response to the first-ever DNA Day, and we remain committed to our mission," the company said in a statement to ESPN. "Since 2014, we have been helping people understand the links between their genes, and how their minds and bodies work through our DNA tests and community events. We look forward to continuing our partnership with the Ravens."

Had the promotion gone as planned, Ravens fans would have received a cheek swab kit, and then dropped the sample in a bin in the stadium after registering with ORIG3N online.

While the actual accuracy of the test is a topic of debate among members of the medical community, the law community has its own qualms about the promotion—namely, the fact that, through registering online, fans give ORIG3N the right to their genetic information from the test.

"The privacy policy stated that the company could keep any information obtained for as long as they wanted and they could share it in any way," Bradley Shear, a sports privacy lawyer, told ESPN. "Now, imagine there's a crime in the vicinity of the stadium, and they give law enforcement the information from Ravens fans whose information was volunteered."

So, ORIG3N still has a few kinks to work out before it makes the first DNA test promotion a reality.

People Are Loving Their COVID Vaccination Stickers: Here Are the Best Ones We've Seen