Stadium giveaways more or less fit into a mold. Rally towels are popular, as are schedule calendars, T-shirts and fedoras for some reason. Sometimes teams go a bit out-there, but the Baltimore Ravens may have taken the cake when it comes to outrageous stadium giveaways.

Yes, you read that right, the Ravens are allowing fans to learn about their genetic makeup, thanks to kits from Orig3n.

While it's a fun idea for fans to check their genetic makeup and health, some medical professionals are skeptical about these particular devices being as effective as advertised. 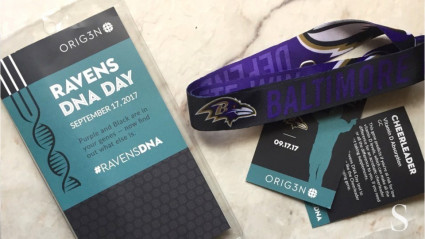 "It can be very useful, but in many other cases we just don't know enough," Alan Shuldiner, professor at the University of Maryland School of Medicine, told the Baltimore Sun. "I think it can be very deceptive. I sometimes call it 'snake oil genomics.'"

The kit features the Ravens logo, along with the slogan "Purple and Black are in your genes—now find out what else is."

OK, that's pretty catchy. We have to admit.

The kit tests for four genes, including information on a person's power and sprint performances, and information that can reportedly help predict risk of low levels of Vitamin D.

The problem, which surely isn't a surprise to many of us, is that the genetic test results you get from a stadium giveaway at M&T Bank Stadium aren't as accurate as the testing results you'd get from your general practitioner.

"The general public has a thirst to understand the genetic makeup," Shuldinger added. "A Ravens fan could get a genetic test and results show you've got this gene that says you are more likely to have good Vitamin D levels. The person will be mis-served, and think he has a gene that protects him from that."

"DNA Technology is very new," she told the Baltimore Sun. "It wasn't that long ago that the genome was sequenced. Before this you would have to go to a genetic counselor to get your personal DNA background. There will always be skeptics when any new technology comes to market, but it's important to look at what is available to us now in the 21st century."

Orig3n also is sponsoring the San Francisco 49ers, but doesn't have any giveaways planned for them yet. But, according to Kevin Rochlitz, Ravens senior vice president of corporate sales and business development, these kinds of promotions are new, but not a one-off thing.

"They're trying to enhance the fan experience at our home games," he said. "It's a tool for consumers to have better access to information about their bodies. This is a good company."

"…With bobbleheads, T-shirts and caps becoming so commonplace, teams are always looking for new ways to capture the fancy of the crowd."