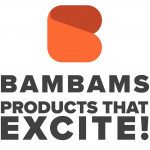 BamBams, Manassas, Va., announced that Benn Chazan, a longtime member of the company, has been promoted to the position of vice president of sales. Chazan is charged with leading BamBams’ worldwide sales initiatives and its team of account executives into 2017 and beyond.

“We’re very pleased to announce that we have promoted Benn Chazan to the position of vice president of sales," said Dan Taylor, president and CEO of BamBams. "Benn has been the national sales manager since 2009 and has been with us since 2005. He has great industry experience and has been integral in the sales growth of BamBams."

“I am excited to continue to develop strong distributor relationships, as well as develop my team of great [account executives]," Chazan said. "2017 is going to be a strong year for us, we have a lot of value add to bring to our industry."

“As BamBams begins its venture into 2017 with a re-branding campaign, a new vice president of sales and a strong team of integral members, we couldn’t be more excited for our potential,” said Brock Taylor, director of brand strategy.