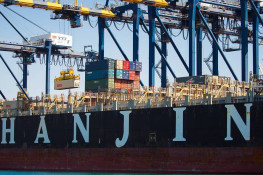 Earlier this month, we reported on South Korean shipping company Hanjin Shipping Co. Ltd.'s stranded cargo ship. Because the company filed for bankruptcy in August, it stranded several ships off the coast of California. Finally, the company's main creditor offered Hanjin $100 million to gets its ships moving,  The Wall Street Journal reported.

According to Korea's maritime ministry, 31 vessels of the compan 97 ships have finished off-loading in California, Spain and several other loading docks. Currently, 32 cargo ships still remain stranded at sea, and 34 ships are voyaging back to South Korea to unload.

Because of the bankruptcy and subsequent stranded cargo, many American retailers feared they wouldn't receive holiday shipments in time. But now, it seems that the shipments will make their on-time arrivals.

No word yet on what will happen to the ships that remain stranded. Stay tuned to Promo Marketing for more updates on this developing story.