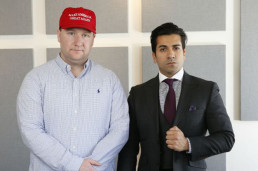 Greg Piatek (left) is suing The Happiest Hour for denying him service after he wore a "Make America Great Again" hat inside the bar. (Image via New York Post)

A guy walks into a bar wearing a Trump hat. The bartender says, "Hey, you can't wear that in here." The guy sues. (Cue rimshot.)

Does that sound like a bad joke? That's because it's a true story.

A Philadelphia accountant was refused service at a Manhattan bar after employees took offense to his "Make America Great Again" cap.

Greg Piatek, was ordering drinks at The Happiest Hour in the West Village when he said a manager told him, "Anyone who supports Trump—or believes what you believe—is not welcome here! And you need to leave right now because we won't serve you," according to The New York Post.

The altercation occurred in January, after Piatek and two friends visited the 9/11 Memorial. A bartender reportedly served Piatek and his friends, but when he tried to order a second round, another bartender noticed his hat and skipped over them, serving others instead.

When one of Piatek's friends pointed out that they had been skipped, the bartender allegedly responded, "Is that a joke?" He served them, but reportedly did so in a disgruntled fashion.

"Ignoring me because I'm wearing the hat is ridiculous," Piatek told The New York Post. "It's really sad."

A third bartender allegedly asked Piatek if his hat was a joke, and told him that if he would support Trump, he "must be as terrible a person."

Piatek filed a lawsuit against The Happiest Hour earlier this month, accusing the bar of intentional infliction of emotional distress and discrimination, among other accusations, and is seeking unspecified damages, according to Philadelphia Magazine.

As a follow-up, a reporter from The New York Post went to The Happiest Hour donning a "Make America Great Again Cap" to see what happened.

Shortly after walking in, a manager told her, "We've literally had issues. Allowing politics into the bar is always a bad thing. About two and a half weeks ago, we had a group that was all wearing 'Make America Great Again' hats and then had to break up a fight. Had we not had somebody like [the bouncer], it would have been very bad."

The writer, Heather Hauswirth, kept the experiment going, claiming she was having a bad hair day, and accepted the manager's offer to wear a hat of his own.

After putting the hat on the table, Hauswirth wrote that "a couple of drunk-seeming bros" noticed her hat, and asked for it. To see how much she could get for it, she tossed out the figure of $100. A woman with the group said that the patron could "afford more than that" so she ended up selling it for $200. (One of the guys swiped a $50 off the table, so she ended up with $150.)