Last week, we got a glimpse at some of the branded merchandise that Olympic athletes received from sponsors and the game's organizers. One of the standout products was a blanket/pillow combination featuring the games' official mascot, a panda named Bing Dwen Dwen.

Bing Dwen Dwen is apparently so popular in China that customers lined up in the cold outside of official merchandise retailers, cleaning out all of the Bing Dwen Dwen gear by 2:00 p.m. on Saturday.

Shoppers told Reuters that getting their hands on Bing Dwen Dwen merchandise is almost impossible in Beijing.

The most interesting thing is that it took the games actually starting to create the demand. A security guard at the Beijing store told Reuters that Bing Dwen Dwen merchandise has been on sale since last year, but the Lunar New Year occupied most shoppers' attention until now. 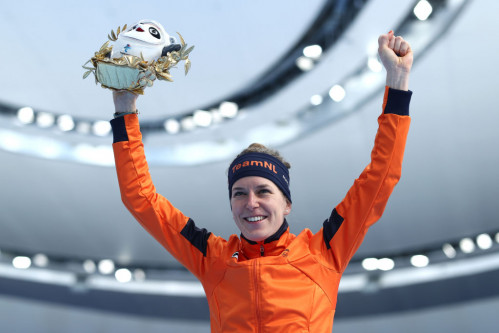 "Then suddenly, yesterday and especially today, the crowds appeared out of nowhere and snapped up all of a year's worth of stock," the security guard said.

This answers the question of whether these mascots are worthwhile for the games. Some have been more popular or well-received than others, but it's hard to argue with this demand in Beijing. Bing Dwen Dwen is a hit, both among Chinese fans and Olympic athletes who get to sleep with the panda's face on their blankets.

Those special products the athletes received might have just become more valuable, too.

It looks like medalists receive a special statue of Bing Dwen Den, too, showing that the Beijing organizers are putting the mascot at the forefront of the televised events, which pushes the demand even further.