Though consumption totals are down, beer begets big business in Belgium, with booming export numbers meaning that anyone who wonders, “What’s the haps?” on hops will likely receive a positive answer in perpetuity. With 60 offerings, the Bruges-situated Beer Wall attracts locals and travelers thanks to management’s careful consideration of not only the drinks it will serve but also the glasses that will hold them. While the powers that be hope that patrons come to the establishment with curious eyes and eager taste buds, they have realized that far too many guests also venture there with sticky fingers, leading to an alarm system installation to eliminate the confiscation of the beverage holders.

“Every year, we lose at least 4,000 glasses,” owner Philip Maes said of implementing the roughly $5,000 protection device. “The tourists, in particular, like to walk away with them.”

Thanks to sensors placed on the bottom of each coveted item, said visitors will have to settle for souvenir shop stops if they want to go home with tokens from their Belgian journeys. The very products that Maes’ guests like to pilfer are conveniently up for sale just next door to his place of business, but, temptation being what it is, many elect to procure a five-finger discount. Regardless of one’s distinction as a resident or a wayfarer, the business needs to manage its finances scrupulously, knowing that the glasses reflect Belgians’ preoccupation with serving each of the nation’s roughly 1,600 beers in specific vessels, with many of them yielding advertising opportunities. 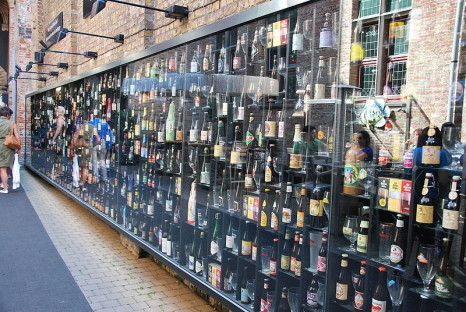 Beer is a huge economic and social boost provider in Belgium, where one location is addressing glass theft through an innovative technological resource. | Credit: Wikimedia Commons

That desire to promote his brewery allies through glassware used or purchased, rather than stolen, certainly inspired Maews to install the sensor system.

“They just take it with them without too much embarrassment,” he said to a Belgian publication, with the Telegraph noting how swiping a pub glass counts as “a major breach” of drinking etiquette in the European land.

The latter news source reveals some of the popular targets among the lawbreakers, adding, comically, I must say, that the theft prevention tools cause “even redder faces among drinkers of the famously powerful Belgian beers.” While the initiative to thwart glass thieves has a creative precedent through a Louisville brewery’s decision to place a partial logo on its glassware and a fellow Belgian location's demand for patrons' shoes, this latest endeavor sounds more compelling in that it is looking to defend the integrity of multiple brands.

It is certainly lamentable that Maes would have to resort to such a measure (one wonders how many would-be grubby end-users he has busted and what sort of noise emanates from the sensors, if any), but his move proves, yet again, that brand preservation is one of the biggest topics that companies must keep coming back to so as to compete with their contemporaries for consumers’ attention and patronage. In that respect, businesses will never shout “Last call” to ideas on how to sustain and grow their identities. Cheers to you, then, Beer Wall.