If there's one thing that can be said about this 2016 presidential election, it's that the promotional products are fired up. From Ted Cruz's "Trumper Tantrum" baby apparel to Hillary Clinton's "Pantsuit Tee," the candidates are trying their best to strike a chord with voters. However, this week, Bernie Sanders decided enough is enough.

According to The Washington Post, a lawyer for the Bernie Sanders campaign is demanding Daniel McCall, owner of Liberty Maniacs, cease selling all promotional products with the phrase, "Bernie is my comrade," alongside the profiles of Socialist figures Karl Marx, Friedrich Engels, Vladimir Lenin, Joseph Stalin and Mao Zedong. 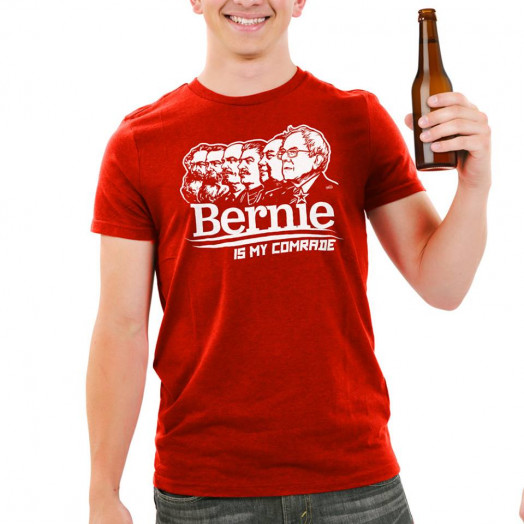 Sanders' campaign lawyer is claiming the design is an infringement on its trademark and copyright citing Section 43(a) of the Lanham Act. The lawyer is demanding that McCall cease and desist selling the materials, and destroy all remaining materials.

In response, Paul Alan Levy, on behalf of McCall, said:

It is your contention, apparently, that an ordinary and reasonably prudent consumer would tend to be confused about whether it is the Sanders campaign that is promoting Sanders’ candidacy by associating him with the 19th century theoreticians of the communist movement as well as with three ruthless Communist Party dictators.

That contention is absurd. You cannot use trademark theories to silence members of the American public who disagree with your client’s views and oppose his candidacy. They can hardly express their views in that respect without identifying the candidacy about which they wish to speak; and it is precisely because the logo is so recognizable that it is an excellent way of specifying which “Bernie” is the subject of commentary. Moreover, it is very common for people to express their views about presidential candidacies, completely independent of the campaign; such expression is so common that it defies belief that a reasonably careful consumer would believe that a shirt or bumper sticker associating your client with Communists necessarily came from the campaign itself.

The letter ends with Levy stating that McCall will not remove the images from his site or discontinue selling the "controversial" products.

Definitely seems like Sanders' campaign team can't take a joke. Or perhaps, this T-shirt just went too far. What do you think?