Is This the Best Mustache Ever Immortalized in Bobblehead Form? 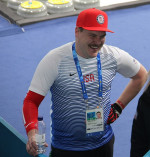 Whenever a huge athletic competition commences, I usually keep close tabs on how the favorites are faring, but I always have a soft spot in my heart for underdogs and unheralded participants. Minus a medal in the Winter Olympics since 2006, the Team USA men’s curling squad counted as one such dark horse when the Pyeongchang pageant began Feb. 9. And due to the relative obscurity that the American contenders’ sport suffers from, I took some stock in how the group performed and admired its march to the gold, especially when member Matt Hamilton drew attention for his facial follicles. He and his quartet of contemporaries have enjoyed renown since their penultimate-day victory over Sweden, and the National Bobblehead Hall of Fame and Museum has decided to join the adulators, announcing it will soon release a commemorative bobblehead featuring the mustachioed Hamilton.

Aside from being incredibly fitting because the Milwaukee-based destination will be honoring a Wisconsin native, the decision to add Hamilton’s likeness to its collection of keepsakes reveals that end-users’ continued infatuation with bobbleheads will not soon—if ever—die down. The representation of the 29-year-old Hamilton, who by day is a research and development technician, also brings up considerations of how well the products depict the lionized competitors.

Bobbleheads have become so ubiquitous in the sports world that any pro team that makes them a promotion is bound to achieve great results. However, performers occasionally balk at how they look in plastic form, but Hamilton, whose bobblehead design, per the museum, is subject to change (don’t you dare change a hair!), appreciates the gesture, which the Badger State spot is dubbing “the first curling bobblehead ever produced.”

Hey everyone!! The people over @BobbleheadHall have been working on making the first ever #Curling #bobblehead for me! The pre-orders are available at https://t.co/sCdxk0MRXI and should be shipping later this year! Make sure to get your mini version of my giant head! #stache pic.twitter.com/GIK2Tlb1Zn

While the gold medalist will experience novelty through the commendation, with shipment of his memento possibly occurring in June, he is definitely not the first mustachioed competitor to have his facial hair earn him commemorative immortality. In terms of what I have glimpsed among other lauded performers, the bobblehead of Hamilton, whose ’stache reminds me of that of Kansas City Chiefs coach Andy Reid, would not take home the gold but would have to settle for silver, with Hall of Fame hurler Rollie Fingers’ handlebar look taking top honors.

Bobbleheads can prove so disarming that this lifelong Boston Red Sox and Philadelphia Flyers fan can give nods to representations of New York Yankees legend Thurman Munson and then-Washington Capital Troy Brouwer. For sheer laughter, though, nothing is ever going to merit more consideration than this likeness of Danny Espinosa, who, as of Monday, needs an employer.

Which follically blessed athlete/competitor’s bobblehead has most impressed you, and whom do you feel should next help collectors to continue to let their hair down?