Why You Should Bet Big on Athletic Apparel

Athleisure, athletic apparel, sportswear, gym clothes—whatever you want to call it—it's a huge power player in the apparel market. Celebrities everywhere are jumping on the bandwagon, and you pretty much can't cross the street without seeing someone in these comfort looks. The question is, does the ubiquity of athletic apparel translate to increased sales? Short answer: yes.

In 2016, the global apparel and footwear industry experienced sales growth of 3.8 percent and total sales of $1.67 trillion, according to Quartz. This past year experienced the weakest growth since the economic crisis in 2008, but what's interesting is what comprised the growth.

Quartz reported that sportswear "saved the industry from even poorer results," which is important for your apparel businesses. Yoga pants and activewear outpaced other apparel categories for the third year, and increased to 7 percent in 2016. 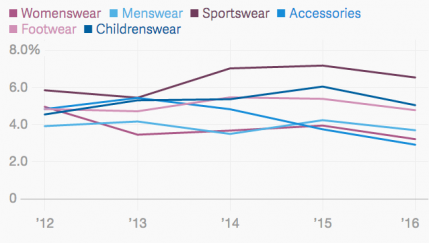 Because these athleisure staples have transcended into street style and fashion, there's no limit to their potential success. While fashion experts might have suggested that athleisure would experience decreased growth in 2017, it sure looks like these styles are here to stay.

For your next apparel promotion, consider an adaptable athletic look, like yoga pants, joggers, racerback tanks and quarter-zip pullovers with thumbholes. And, if you're looking for more inspiration, these four athletic apparel trends will be huge in 2017. The possibilities are endless.