Being a fan of the Buffalo Sabres has proven a test of one’s patience for the last decade, as the team has not won a playoff series since skating by the New York Rangers in the 2007 Eastern Conference Semifinals and has missed the postseason six straight seasons. With dynamic center Jack Eichel leading the charge, though, the club could come to contend for a playoff spot either this year or next, and perhaps that budding enthusiasm for the franchise allegedly prompted a website to hawk bogus merchandise to supporters eager to have the athletes lance their more vaunted opponents. 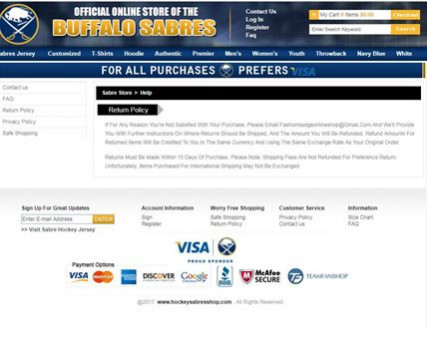 This is how the supposedly fraudulent website appeared before authorities took it down. (Image via wivb.com)

The organization joined the National Hockey League and the Better Business Bureau (BBB) in condemning hockeysabresshop.com, relying on a fan-submitted grievance with the third party in that trio to go after the entity that had supposedly dubbed itself “the official online store of the Buffalo Sabres.” Entering the website address now leads consumers to a notice from Green Burns & Crain, an intellectual property law practitioner that proclaims “The online store that formerly used this domain has been disabled, pursuant to a U.S. federal court order, for the sale of products bearing counterfeit trademarks.”

The Atlantic Division constituents are no strangers to dealing with fake goods, with their last significant playoff run and Eichel’s rookie campaign being among the most notable battles against purveyors of bogus products. No matter how often the team or any other franchise from any sport contends with counterfeiters, fans are always the ones who lose out. In this case, the frustrated end-user never received his desired merchandise, leading the individual to discover the site owners had not listed any means to contact them. The BBB stepped in to find the defendant established its domain overseas and had been using the nonprofit’s logo fraudulently.

Green Burns & Crain do hockey and other professional and amateur sports fans a favor by including legitimate links to secure licensed items. In doing so, the legal figures affirm tips that the BBB has long touted as ways to avoid becoming a victim of scammers. While it is a shame that a backer, in looking to bolster his admiration for the Sabres, who have won two straight to run their record to 3-5-2, ended up hoodwinked, that person’s reporting of the incident led to the elimination of a deceitful operation. As for hockeysabresshop.com, whoever ran it numbers among hundreds of defendants in a massive lawsuit brought by six plaintiffs, including NHL Enterprises, L.P., with the Northern District of Illinois Eastern Division as the overseer. Since the period for the sued entities to reply ended yesterday, it will be interesting to see how they have responded and what their punishment, if any, will be.