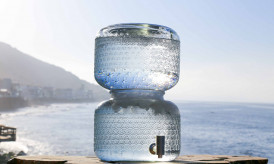 Single-use water bottles have been a contentious issue lately, as cities and parks have moved to stop selling them or ban them altogether. Companies have started making new types of water bottles that are more eco-friendly, too. But this new idea has nothing to do with the bottles. This has to do with the water itself.

Doug Evans, an entrepreneur whose original startup Juicero shut down in September, got an idea after going on a 10-day cleanse drinking only "raw" water at Burning Man. By "raw" water, we mean water that hasn't been treated or filtered at all.

The company that gave Evans the water for his cleanse was Live Water, which has turned the heads of Silicon Valley elite, who want to throw their money (or Bitcoins, whatever those are) at this cutting edge idea.

The problem? Drinking unfiltered, untreated water is probably incredibly unsafe to do. And, Live Water's founder, who changed his name from Christopher Sanborn to Mukande Singh, per Fortune, claimed that public tap water is "toilet water with birth control drugs in it," which is spreading dangerous misinformation to the public.

The company also says that "all other filtered and even bottled spring waters are sterilized with UV light, ozone gas, and a sub micron filter. This is similar to how most juice and dairy products are pasteurized for shelf stability."

You know, that thing they do to make sure we don't get sick when we drink milk. Pasteurization is, after all, named after Louis Pasteur, a breakthrough thinker in  vaccination and preventing disease.

Further, Singh claimed that his company's product is "probiotic," meaning it contains intestinal organisms. According to Fortune, the water turns green if not consumed within a month, so that's probably not an empty claim.