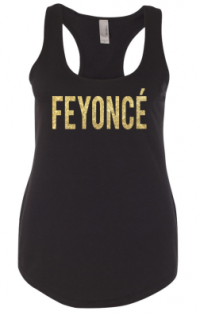 “If you want to sell it, then you better keep any likeness to Beyoncé’s person, name or lyrics off it.” That’s how “Single Ladies” goes, right?

On Tuesday, Beyoncé filed a lawsuit in Manhattan federal court, suing Texas-based company Feyoncé Inc. for trademark infringement, Reuters reported. The lawsuit calls for the company to stop selling its apparel—think shirts, sweatshirts and tank tops—and coffee mugs that say “Feyoncé” (you know, like, fiancé) on them. It also seeks unspecified damages.

The complaint names Feyoncé Inc. and three San Antonio-based individuals of “brazenly” selling the merchandise. Beyoncé has a trademark on her name, and believes “Feyoncé” is too similar.

According to BBC, the defendants are accused of “trademark infringement, unfair competition, trademark dilution, among a score of other statutory and common law violations.”

The lawsuit alleges the merchandise confuses consumers and causes her irreparable harm, and that the company has ignored requests to stop selling the products.

The lawsuit specifically mentions a coffee mug, which, in addition to “Feyoncé,” also reads, “he put a ring on it.” The lawsuit claims this was done in reference to Beyoncé’s song, “Single Ladies.” 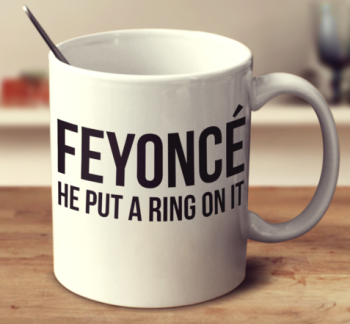 The lawsuit also claims that defendant Andre Maurice has filed two U.S. trademark applications for “Feyoncé,” one with and the other without the accent over the “e.”

This isn’t the first time Beyoncé has taken issue with the “Feyoncé” phrase, though. Last year, her lawyers complained and threatened Etsy over “Feyoncé” mugs, Billboard reported. The items and online shop were taken down from the site.