Big Cereal Brands Duke It Out Over Shelf Display Materials

Imitation might register as the sincerest form of flattery for many individuals, but, in the business world, it often resounds as the easiest inspiration for litigation. Post Consumer Brands and General Mills, who hold nearly half of the ready-to-eat cereal market share, will soon engage in a legal confrontation, as the former is looking to leave its industry rival feeling soggy, accusing it of copying a marketing means that “imitates [its] innovative divider and merchandising system for bagged cereals.”

The entities are quite familiar with each other already, not only because of their status as breakfast behemoths but also due to their Minnesota settings. Their impending saga, which kicked off in earnest yesterday through a lawsuit filed in Missouri, the base state of Post Holdings, the plaintiff’s parent company, could end up being another example of the possible perils of even having an advertising approach slightly mimic an established course. In this case, Post, famous for such products as Grape-Nuts, Honeycomb and eponymous versions of raisin bran and shredded wheat, is claiming that its in-state competitor is using plastic dividers akin to its own to peddle bagged packages of products such as Cocoa Puffs and Lucky Charms. 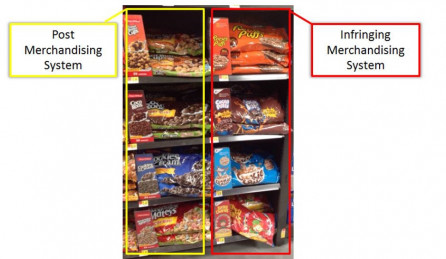 Post, whose display appears on the left, contends that General Mills is copying its use of plastic dividers for bagged cereals. (Image via Star Tribune)

This spat is teeming with interesting aspects, including the increase in ready-to-eat bagged cereal sales. Consumers’ increasing reliance on the box-free and most-important-meal-of-the-day components stands as a point of pride for Post, who, though it markets most of its offerings in the customary containers, has also benefited from its 2015 acquisition of MOM Brands. Another North Star State company, it became renowned for its Malt-O-Meal goods, which have since become profitable Post commodities.

In fact, its director of corporate communications, Linda Fisher, holds that her employer’s 2016 decision to create plastic dividers with a trapezoidal-like front panel—so as to display Malt-O-Meal lines in vertical columns—likely helped its bagged cereal sales to jump 6 percent over the last year. When Post introduced the partitions, it placed “Patent pending” notices on them, so once legal clearance came through yesterday, the company, founded in 1895 as Postum Cereals, made good on a promise to fend off what it perceives as General Mills’ blatantly knocking off its idea after having dismissed the packaging as “too big for store shelves,” according to the lawsuit.

“We welcome competition—it really does make us better and benefits customers and consumers—but it has to be competition where everyone plays by the rules,” Fisher said of the matter, which the defendant will have to face knowing its overall retail sales have fallen 3 percent over its last fiscal year, which concluded in May. “We’ve spent millions of dollars creating our merchandising system for the Malt-O-Meal cereal brand. We work hard to protect those investments in the marketplace, and we’re going to work just as hard to protect it in the courts.”

Though many consumers have given cereal the cold shoulder as their preferred day starters, that has not stopped industry presences from trying to milk their products’ possibilities. Banking on the surging sales for its bagged goods, Post, which also contends, for what it’s worth, that General Mills dubbed the Malt-O-Meal creations as “inferior quality products,” hopes to have a court—through a jury trial—halt its adversary from using the vertical display, fork over funds for financial damages and part with all revenue acquired through the alleged infringement. Since General Mills introduced its bagged cereal only this year, the financials should be readily available for Post to make a solid request for retribution.

My taste buds have no bias in this matter, as each company frequently gives me whole grain goodness, but I am fighting the initial urge to feel Post will crunch General Mills. What is your stance?