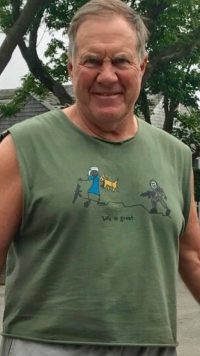 Throughout his surefire Hall of Fame career, Bill Belichick has been able to count many reasons to revel, including amassing 263 overall wins, five Super Bowl titles and three Associated Press Coach of the Year honors, but he has also had his scruples scrutinized a few times in helming the New England Patriots (Spygate and Deflategate, anyone? Side note: Will every potentially nefarious incident until the world ends feature “-gate” in its name?) The 65-year-old sidelines patroller, never the recipient of much regard for his fashion sense, has received equal parts kudos and condemnation for donning a T-shirt that features a rifle-bearing infantryman smiling as a dog bites the left arm of a turban-topped male.

Belichick wore the cut-off garment Wednesday on Nantucket, with his smile looking to support its declaration that “Life is great.” Available at www.tridentk9.org, a site that former Navy SEAL and present Los Angeles-based deputy sheriff Jim Amann oversees, the item, according to the company’s website, looks to laud the downfall of terrorist Osama bin Laden. That understanding prompted praise for Belichick from the Boston Herald, whose Tom Shattuck dubbed him “a true patriot,” but acceptance has not proven universal, as Sean Newell, of Vice Sports, stated the decision to don the shirt was “Pretty weird. Some might even say offensive,” and a Twitter user said it reminds him “of that video of a police dog mauling a Black man.”

“I’m surprised,” Amann, whose service vocation saw him stationed in Iraq and Afghanistan, said of the laconic leader whose team’s 34-28 win in February’s Super Bowl LI made him the first head man to claim a quintet of Lombardi trophies. “I’m a big fan of his.”

Belichick counts himself as a solid supporter of our nation’s protectors, stemming from his father’s long-time assistant coaching duties at the U.S. Naval Academy. Perhaps it is fitting, then, that the younger overseer guides the Patriots. Is it fitting, though, that he chose this shirt, the proceeds from which Amann will give to the Navy SEAL Foundation, which is helping when the fashion police often double as commentators on everything else under the sun?