We were beyond excited when we heard that Bill Murray and his brothers launched a golf apparel collection called William Murray Golf. The pinstripe polos and baseball caps were a refreshing twist on golf classics, and now, we're thankful for a look at the new spring collection.

According to SGB Media, the spring collection will feature polos in tropical floral patterns, golf buttoned down shirts, baggy shorts in aqua and hats. 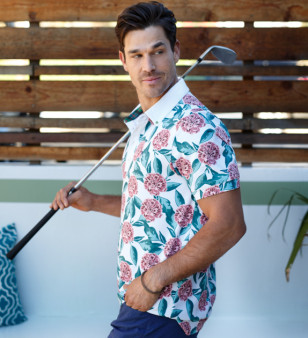 The New York Times even said of the collection, "Not since Jack Nicklaus ambled down the fairway in plaid Sansabelt trousers has golf wear looked this wonderfully gauche."

“You look at the golf world right now, it’s just not that cool,” said Joel Murray, CEO for William Murray Golf, according to The New York Times. “I’ve got boys that are 26, 25, and they’re not into golf like we were growing up. They think it takes too long.”

The Murray brothers plan to release two collections a year, and eventually expand into jackets, blazers and pants. While the collection is aesthetically pleasing, it is also functional on the golf course, thanks to deep pockets and a slew of other features.

What Makes a Good Golf Promo (According to Charity Golf Event Organizers, Sponsors and Attendees)

'Golfleisure,' Sun Protection and More: What to Know If You're Selling Golf Apparel in 2021

The First-Ever Online Masters Merch Store Is as Impressive as the Real Thing, But Less Intimidating
Comments
The Top Lists