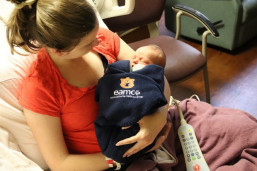 Babies born during football season at East Alabama Medical Center are Auburn fans whether they like it or not. | Credit: AL.com

When asked why some of us have our particular sports allegiances, a lot of us likely respond with something along the lines of "We can't help it, we were born into it." That's a good excuse for people who like less-than-stellar teams (we know all about that in Philadelphia), but their lifelong devotion is always apparent.

In a few years, children born from now until November at the East Alabama Medical Center in Opelika, Ala., can honestly say they earned their Auburn University fandom at birth, thanks to a giveaway at the hospital.

According to AL.com, babies born during football season will receive a commemorative Auburn University blanket.

"Through this new initiative with EAMC, we can provide them with a special memento during one of life's most precious occasions," Chris Davis, Auburn Sports Properties vice president and general manager, told AL.com.

But, what happens if the parents are diehard University of Alabama or University of Georgia fans? That's too bad, because they're getting an Auburn blanket.

"Maybe they will change their allegiance," John Atkinson, the hospitals director of PR and marketing, told AL.com. "But, if not, they can simply re-gift it to an Auburn family."

Some day, if any of those babies go on to play sports at another SEC school, their parents can shame them with photos from the Auburn days of their youths, like one writer's father likes to do with pictures of him in Washington Redskins shirts as a toddler.