The American Red Cross is partnering with Discovery Channel for a "Shark Week"-themed incentive program to get Americans to donate blood.

It's a little morbid, but people love Shark Week. A lot of people (like me) have even watched plenty of shark content while on vacation at the beach.

To encourage donations of blood, platelets and plasma throughout July, the Red Cross is giving people the opportunity to win an awesome "Shark Week" merchandise package suited for the even the most cautious beach-goer: a cruiser bike, a smokeless portable fire pit, a paddle board, a kayak and a $500 gift card to use for even more beach accessories of the winner's choosing.

Additionally, everyone who donates blood between July 21-24 will receive an official Shark Week T-shirt. 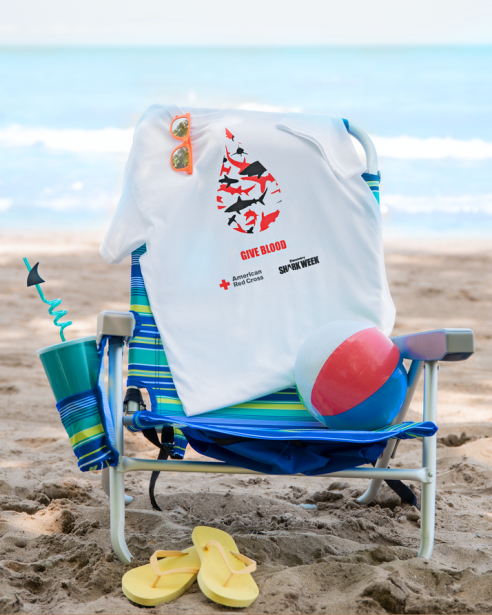 "Sharks are vitally important to the health of the planet," the Red Cross website says. "Just like you play an equally important role in helping keep our national blood supply healthy and strong. So dive into donating; we won't bite!"

This isn't the first time Discovery has worked with the Red Cross on "Shark Week" campaigns. Previously, donors in Southern California could receive branded T-shirts, and other donors could enter for a chance to win a trip to the Galapagos Islands.

And it's also not the only promotional marketing Discovery is doing for "Shark Week." You might even catch a glimpse of a branded blimp moving through the sky like a Great White does through the depths (or shallows...).

The #SharkWeek blimps are breaching into the sky this Friday! 🦈🌤 Rep the sharks on your coast by posting your blimp sightings on social media with #EastShark or #WestShark.

Head over to https://t.co/FIjslNjrfC Friday to track the journey and see which blimp gets the most love! pic.twitter.com/6p3GMksQTz

The co-branding of "Shark Week" and the Red Cross accomplishes a few things. It ties in one of the pre-eminent non-sports TV events of the year. It dangles the promise of a pretty awesome collection of merchandise to win, but also with the guarantee of a T-shirt as a consolation prize.

Everybody wins. The Red Cross receives donations, you receive a T-shirt, and sharks get more people out on paddleboards and kayaks to munch on—I mean safely swim past, because sharks are typically non-aggressive toward humans.