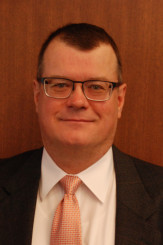 Blue Generation, Long Island City, N.Y., announced that it has promoted Terry O’Brien to the position of senior vice president of sales.

O’Brien first joined Blue Generation as a sales representative for the Midwest in 1999, and rose to the position of vice president of sales in 2002.

“Terry has been a driving force in Blue Generation’s colossal growth in the industry, managing our national sales force with energy and enthusiasm,” said Eric Rubin, president of Blue Generation.