Boise Might Have to Stop Recycling Paper Because of Chinese Legislation 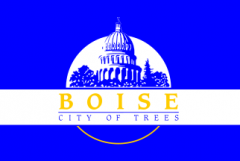 New legislation in Boise, Idaho, could be setting a tone for how the whole country recycles paper in the near future. The city is currently considering two possibilities: Raise rates, or stop the program completely.

The reason behind this is across the Pacific in China. According to the Idaho Statesman, China is the most common destination for recyclable materials from the U.S. Recently, China imposed new restrictions on recyclable paper imports and the level of acceptable contamination in mixed paper, making it incredibly difficult or impossible for stateside municipal recycling centers to comply.

China is no longer accepting mixed paper in the form of newspapers, junk mail, magazines, catalogs and non corrugated cardboard. The contaminants it's trying to avoid include newspaper bags and thin water bottles, which can get mixed up with paper before the sorting process.

It's not just paper, either.

Republic Services, one of the largest waste collection and recycling companies in the U.S., reportedly said it wouldn't accept many of the plastics that people in the greater Boise and Treasure Valley area were recycling, leading the residents to form a deal with a Salt Lake City company to convert the plastics into diesel fuel.

According to the Idaho Statesman, if Boise ends its paper recycling program, it will cause an additional 640 tons of paper to end up in landfills on a monthly basis.

The other alternative is raising rates enough to give a commercial recycler incentive to handle it, but what that necessary price (or whether a company would even go for it at all) remain unknown.

For now, Boise's public works director, Steve Burgos, recommended that the city put its mixed paper recycling program on hold while they look for long-term solutions with domestic buyers.

When people think about the issue of eco-friendly solutions for recyclable materials, they typically don't think beyond their recycling bins. For many, it could be new information that outside markets, like in China, are influencing the way we recycle our materials or how much we send to landfills because of cost prevention.