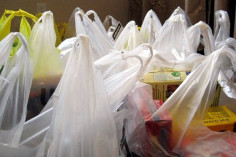 On Wednesday, the city of Boston announced that the city council voted to approve a plan that would ban the use of single-use plastic bags at stores, restaurants and pharmacies.

The council unanimously passed the Reduction of Plastic Bag ordinance, but the ban still needs Mayor Marty Walsh's signature. If he signs the ban, the law will go into effect within one year, according to WCVB.

Under the new rules, single-use plastic bags would be banned, but businesses would sell other types of plastic bags for no less than $0.05. The permitted bags would include reusable bags, recyclable paper bags and compostable plastic bags.

This ordinance has been in the pipeline since 2016 when a task force was put into place to survey city residents about their desire for the ban. They collected 710 responses. Most of those surveyed said they supported an outright banning of single-use plastic bags versus charging a fee.

The ordinance would allow businesses to apply for an exemption for one year, but they would need to provide evidence that they require extra time to use up their existing inventory of bags.

Could Boston set an example to other large neighboring cities that it's time to ban single-use plastic bags? I guess we'll find out.