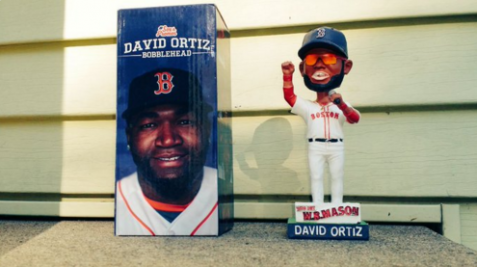 The Boston Red Sox decided this bobblehead of David Ortiz was inaccurate and racially insensitive. (Image via Twitter)

"It was an inaccurate portrayal of David," Kennedy said to the Boston Globe. "It doesn't really look like David. No. 2, I personally thought it seemed to be an offensive portrayal of him, and the facial features were racially insensitive."

BDA LLC, Woodinville, Wash., supplied the 15,000 bobbleheads. The company provided two versions of the bobblehead, but the team ultimately found them both unacceptable.

The company released a statement saying that it understands the team's decision to postpone the giveaway and will work to provide a new product that's more representative of Ortiz, who is set to retire after this season.

"We value our decades-long relationship with the Red Sox organization and its decision to postpone Tuesday's David Ortiz bobblehead giveaway," the company said in a statement. "We're working closely with the Red Sox to ensure the team and its fans receive a quality product."

Ortiz himself wasn't a fan of it either. After seeing a picture of the bobblehead, he wasn't even sure that it was supposed to be him, and he agreed with the team's decision to postpone the promotion, the Boston Globe reported.

"If I was feeling this way, certainly other people would," Kennedy added. "So we pulled the plug."

To remedy the situation, all fans who were at the game last night, rather than just the first 15,000 to the stadium, will receive a replacement bobblehead in the mail.