In response to recent accusations against presidential candidate Donald Trump, critics are urging shoppers to boycott Ivanka Trump's clothing line, according to The Los Angeles Times.

The boycott has taken to social media with the hashtag, #GrabYourWallets. It also targets the stores selling Ivanka Trump's clothing line, including Nordstrom, DSW, Zappos, Dillard's and Macy's.

#GrabYourWallet #Marshall's
I love shopping at you store .
I won't return until you stop selling Trump's brand. pic.twitter.com/L6LkHqiI3I

While the boycott certainly is making waves in the Twittersphere, it's unclear if the clothing line is experiencing any effects. Morning Consult conducted a national survey of 1,983 voters and found that 57 percent of women would not consider purchasing clothing from Trump's line. 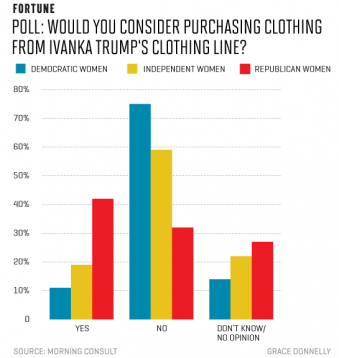 However, Forbes reported that millennial women with disposable income were still "extremely" likely to shop for her clothes and shoes.