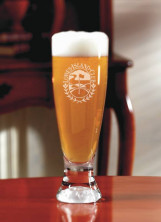 Lawmakers in Florida passed a bill to allow beer companies to supply free glasses to bars and restaurants.

When we say there's a legal battle brewing in Florida, we mean it. That's because the battle is over whether beer companies should be able to provide bars and restaurants with free branded glassware.

Right now, Florida establishments pay for branded glassware at wholesale cost. But, Anheuser-Busch wants to change that, making it legal for breweries and beer distributors to provide restaurants and bars with free glassware. Some smaller breweries see this as a problem akin to "pay to play."

Yesterday, the Florida Senate Regulated Industries Committee unanimously approved a bill that would allow beer distributors to give the items away for free, according to CBS Miami.

A lot of bars are in favor of this, since it would save them a lot on glassware, but small craft breweries and big names (like MillerCoors), aren't in favor of this. A lobbyist for MillerCoors said that allowing the bigger companies, who have more money to spend on glassware, to give it away for free could influence the beer sold at establishments.

Florida Sen. Frank Artiles, the author of the bill, disagreed.

"This is a fair playing field, across the board, from craft breweries to Anheuser-Busch to MillerCoors," Artiles said to The Gainesville Sun. "This has been a success in other states."

Josh Aubuchon, a representative from the Florida Brewers Guild, said that the smaller companies "can't afford this arms race," and estimated that it would cost a brewer with 350 retail customers about $210,000 annually to provide the maximum amount of free glasses allowed under the bill.

"The folks who are really in favor of this are the folks with the biggest pockets who can afford it and the folks who are getting free stuff," he said, "Quite frankly, it really cuts out the smallest of us to participate."

Under the bill, beer companies could give away up to five 24-packs of branded glasses each year for each of its beer brands. Artiles said that he will work with opponents to find common ground as the bill moves to the Florida Commerce and Tourism Committee.