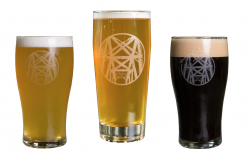 It's no surprise that people like branded drinkware. And let's just say, hypothetically, that you're at one of your favorite bars or breweries, and your drink comes in a cool branded glass with the place's logo on it. Boy, that sure would be fun to use at home, wouldn't it? And what's the harm in just slipping that glass out the door? After all, it's (probably) free for them to get anyway.

"Theft is definitely a real thing that happens," Lindsey Roeper of Cincinnati-based Rivertown Brewing told LEO Weekly. "While you might think it's nothing, every little bit counts when you're running a small business."

So what can places do to promote their brand but deter theft? One Louisville brewery put a partial logo on beer glasses, omitting the "Mile Wide Beer Co." name so patrons might not want to bring the glass home.

"I don't know that glass theft [has] been a huge issue for us at the taproom," Scott Shreffler of Mile Wide Beer Co. told LEO Weekly. "We had initially wanted to do plain, unbranded glassware, specifically to discourage people from stealing. But we ended up printing our bridge logo on the taproom glasses, rather than the full Mile Wide logo."

The idea was that if the glassware doesn't have the company name, people might not want it, but at the same time, the brand is promoted within the building.

This isn't as much of a concern for bars and restaurants who might get their glassware for free. But, as we reported before, it's still illegal in some states for beverage companies to give out branded drinkware for free. So, for the small breweries who are looking to promote their brand, each glass is valuable. And while it's nice that their brand is so popular that drinkers want the logo in their homes, it's not the brand visibility plan the company originally had in mind.