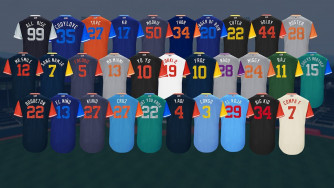 Like all fields, Major League Baseball will never find itself short on haves and have-nots, particularly with respect to which clubs can attract massive crowds. Regardless of attendance figures, the 30-squad entity teems with talented athletes and quirky personalities, and come August 25-27, the overseer will celebrate them through its initial Players Weekend. In conjunction with the MLB Players Association, the league recently released images of the commemorative caps and jerseys the roster members will don, with the latter apparel including creative and often comedic nicknames.

The headwear examples, some of which are stellar (well done, Oakland Athletics!) and a few of which are puzzling (is there still time for the Minnesota Twins to petition for a new design?) and the shirts will certainly prove visual and financial successes, and while the novelty of the whole experience is going to draw amazing reactions from fans (traditionalists, though, might balk over the New York Yankees’ first-ever placement of any names on jerseys), the participants might revel the most by displaying their originality.

Not every performer will heed the call to add a personal touch to his uniform, including the customization of cleats, but those who choose to will give ticket purchasers reflections of cultural pride, comments on physical attributes, acknowledgments of pop culture and affinities for wordplay, among other examples. The national pastime has long been the source of inventive nicknames, and today’s stars have contributed to that legacy through a combination of their surnames, feats and looks. With 45 games on the slate for the weekend, I am going to reveal a bit of bias and list my favorite sobriquets. To see each franchise’s caps and nicknames, head to Business Insider, which notes that Louisville Slugger will be customizing bats, too.

1. Dustin Pedroia: “Laser Show” – The Boston Red Sox great has had this nickname, which reflects confidence in his ability to light up pitchers, since his Arizona State University days.

2. Ben Zobrist: “Zorilla” – This Chicago Cub certainly proved a beast last year in helping his club to its first world championship since 1908.

3. Trevor Bauer: “Bauer Outage” – Who doesn’t like puns? This Cleveland Indians hurler will hope to be lights out when his team hosts the Kansas City Royals.

4. Melky Cabrera: “Melkman” – Maybe this Royals star will turn “Bauer Outage” into “Bauer Outrage” if he registers a timely hit.

6. Matt Garza: “The Count” – His uncanny resemblance to the “Sesame Street” mathematician gives the Milwaukee Brewer this nickname.

7. Curtis Granderson: “Grandyman” – This is the only time in my life that I will ever positively acknowledge the New York Mets.

8. Todd Frazier: “Toddfather” – See the above note, and replace “Mets” with “Yankees.”

Oh, how I wish MLB had come up with this idea sooner! Could you imagine seeing Willie Mays, the “Say Hey Kid,” robbing Henry “Hammerin’ Hank” Aaron of a home run, or Frank Thomas, affectionately known as “The Big Hurt,” proving he is the most colossal of all by going deep against Randy Johnson, the Cy Young Award-winning flamethrower dubbed “The Big Unit”?