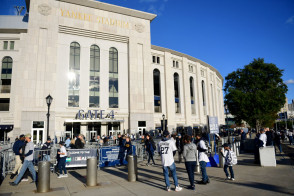 Like the Dodgers, the Yankees are more of a brand than a team these days. People wear Yankees gear to show local pride as much as they do to show team support. The "NY" logo is almost as synonymous with the city's identity as the Empire State Building nowadays.

Because there are plenty more people who love the Yankees and New York than can afford to go to a game at Yankee Stadium very often, local businesses in the surrounding neighborhoods in the Bronx have been selling Yankees gear to New Yorkers for years. That was, until Major League Baseball and Nike flexed their litigious muscles.

According to PIX11, the deal would only allow Yankees merchandise to be sold at "premium distribution points," which did not include the small mom-and-pop stores located around the stadium. For those business owners, Yankees gear is a cornerstone of their income.

"If these eight businesses can no longer sell official Yankees merchandise, they will be forced to close, and the area surrounding the stadium will be a ghost town," Bronx Borough President Ruben Diaz, Jr., said in an open letter to MLB Commissioner Rob Manfred, the Yankees' front office and Nike.

It turns out the Yankees agreed with him.

"It certainly would have been more productive if you had called us before you wrote your letter," the team responded. "If you had, you would have been advised that we agree with you and support our local Bronx businesses."

The Yankees had actually reached out to the league themselves to voice similar concerns.

"Yankee Stadium is located in a diverse and one of the poorest communities in the U.S.," the team wrote in an email in October. "As such, the local retailers expend substantial time in developing their businesses, especially with respect to their ability to sell MLB licensed product."

Thankfully, Nike and MLB showed some heart not usually seen in giant, faceless corporations, and everything turned out alright for these businesses.

“I am pleased to learn that the New York Yankees, Nike and Major League Baseball were receptive to public pressure to do the right thing, and have heeded the concerns of our business community in the area surrounding Yankee Stadium," Diaz wrote in a statement. "The news that these three entities have reversed their policy that would have prevented these longtime mom-and-pop stores from selling official Yankee merchandise is a welcome one."