In my time as a sports fanatic, I have nurtured affinities for a few teams, and have received encouragement to dislike other franchises based on my fascination. That has meant despising the New York Mets in cherishing the Philadelphia Phillies, loathing the Pittsburgh Penguins and New York Rangers in living and dying by the Flyers, and detesting the New York Yankees in rooting for the Boston Red Sox (Sorry, Big Apple). As a semi-Boston Celtics fan, though, I could never for the longest time muster any disdain for the Los Angeles Lakers (LaVar and Lonzo Ball have remedied that situation, fellow Beantown buffs), and often found myself cheering for star guard Kobe Bryant, only seven months my senior. On Dec. 18, the dynamo who donned purple, gold and black for his entire 20-year career had his jersey numbers 8 and 24 retired, with affiliated merchandise sales from the day totaling a fitting $824,000.

Bryant, who sniped his final jumper for the NBA’s second-most valuable club last year, made the Anschutz Entertainment Group (AEG) quite happy in its role as the owner of the Staples Center, the site of many of his best performances, including his 81-point outburst on Jan. 22, 2006, as he walked away as the game’s third-all-time leading scorer. He drew ample crowds in helping the Lakers to five league titles, and many of those same covetous supporters ventured to AEG’s four locations last week to purchase all things Kobe. 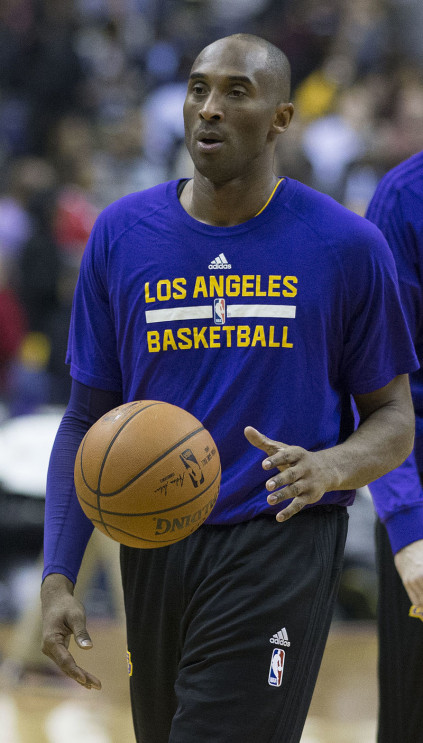 Teaming with Nike, AEG offered a variety of commemorative goodies, including $524 jerseys, as the Lakers sent the aforementioned digits to the rafters, their 10th and 11th such revered numbers. The 39-year-old marksman, whose career feats read like a dream come true for the biggest statistics geek ever (I will one day hold that title), arrived in the league straight out of Lower Merion High School and wore No. 8 for the first 10 seasons of his surefire hall-of-fame journey. Switching to No. 24 before the 2006-07 campaign, he proved equally lethal to defenses, tallying 16, 777 points to go along with the 16,866 scores from his single-digit uniform days.

In terms of sheer economic gain, the jersey retirement/merchandise sale fell short of topping the $1.9 million worth of Bryant-related items, including $1.2 million at the arena, that AEG generated April 13, 2016 in conjunction with the last time the Black Mamba injected his venom into his opponents’ bloodstream. No matter, the latter figure is quite impressive, especially since the non-zero components represent his jersey numbers.

“You couldn’t make that number up,” Sean Ryan, AEG's vice president of merchandise, said, with adoration of Bryant and, to be honest, exorbitant asking prices for the merchandise no doubt helping him and his contemporaries to have a merry Christmas.

At only 11-21 ahead of tonight’s home tilt against the Memphis Grizzlies, the Lakers could surely use the services of the 18-time All-Star, but he is not likely to lace up his sneakers except to play a pickup game. If he were to defy convention, though, maybe the world could come to owe him a big thanks, as he would probably direct some attention away from the Balls (that will always be an awesome outcome) and perform well enough to have a third jersey number retired, inspiring another opportunity for promotional products industry representatives to rejoice. Hey, a guy, even one who now loves to loathe the Lakers, can dream, can’t he?