Come Sunday, though we will be happy to see the FIFA World Cup champion crowned, we will likely find ourselves fending off a case of the “sads,” as parting with what has proven a wonderful tournament will be tough. Budweiser will probably be fighting a few feelings, too, as the final will be the last hurrah for its ambitious Light Up the FIFA World Cup global promotional campaign. No matter who emerges victorious at Russia’s Luzhniki Stadium, the beverage provider could stand to be the bigger winner, as its initiative, which relies on noise-activated beer holders, figures to result in the distribution of 8 million of the innovative containers. 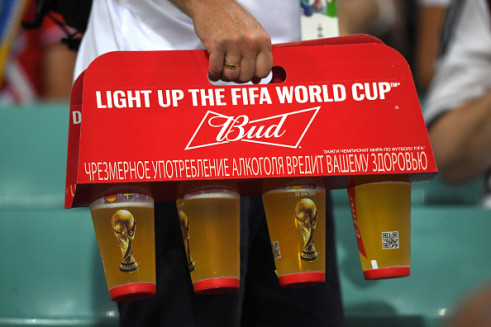 A month ahead of the World Cup, Budweiser, in its role as the official beer sponsor of the tournament, unveiled its brainchild, calling on a drone dubbed Bud 1876 (we love the reference to the company’s inaugural year) to deliver a cold one to a fan situated in the aforementioned sporting venue. While the drone is definitely cool as a standalone way to promote the buzz that the beverage and the pitch-based action will engender (and has had precedents in the promotional products world), the drinkware is the bigger beacon of marketing ingenuity. A PR Newswire account of the concept from May noted that the cups would become illuminated to display “fans’ excitement and energy with increased frequency as their cheering and clapping gets louder to match the action” before them.

Anyone who has watched the tournament can vouch for the effectiveness of the items, as zealots have had ample cause to amp up their vocal cords. Budweiser, in having proclaimed the FIFA World Cup its biggest rollout activation to date, has developed more than 70 versions of the cup and has distributed it to more than 50 countries. Those totals make for complimentary components of the company’s overall mission to place 8 million of the promotional drinkware products among the frenzied masses. The cups have even proven a very touching way for deaf and blind individuals to celebrate “the beautiful game,” with Brand Channel lauding Budweiser for helping to “transmit the energy of each match” to those fans.

Thinking ahead to Sunday’s final, we wonder if backers of the national football team representing France, a country known far more for its wine consumption than its beer enthusiasm, will return to their country intent on filling the promotional drinkwear products with a fine vintage if their heroes emerge with the FIFA World Cup Trophy. No matter their choice, or even their team’s fate, Budweiser looks as if it will be in for a lucrative summer—an impressive feat since the U.S., its home base, did not give it a boost in Russia, as the national squad did not qualify. Here’s to a fantastic final and to good fortune for the American club come 2022’s tournament in Qatar.