This week, the Philadelphia 76ers became the first team to introduce ads on jerseys. Now, the Cleveland Cavaliers have participated in another NBA first as part of the team's playoff series. Budweiser sponsored the league's first virtual reality (VR) experience in partnership with the Cavaliers, according to Adweek. 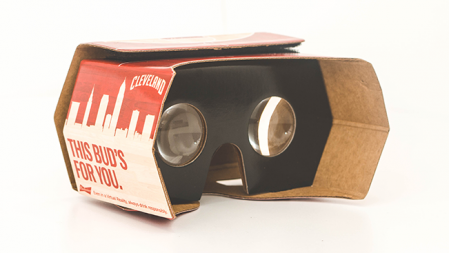 The Budweiser and Cleveland Cavaliers virtual reality headset was given away at last night's playoff game. (Image via Adweek)

The Cavaliers melded the team's official app with a VR experience to give their fans a handful of first-person experiences, including a tour of the Cavaliers' locker room and a courtside view of the player introductions. The team gave away the headsets, created to be used with the app videos, at last night's playoff game in Cleveland.

"As a company, we are always looking for new ways to bring fans closer to the teams they love, and virtual reality is a big part of that," said Lucas Hersovici, vice president of consumer connections at Anheuser-Busch InBev SA, the parent company of Budweiser, in a statement. "The Cavs have been great partners in helping us activate this technology in the NBA, and we look forward to continuing to evolve this activation."

"We're always looking for new ways to connect with our fans by leveraging emerging technologies that deliver unique experiences," added Mike Conley, vice president of digital for the Cavaliers, in a statement. "VR was a logical next step and an area we're excited to explore."

The VR headsets also double as drink-carriers, making them the ideal promotion for basketball game attendees. 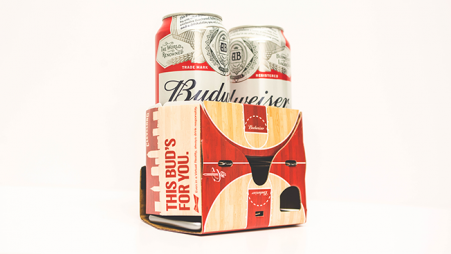 The Budweiser virtual headset doubles as a drink carrier. (Image via Adweek)

What do you think of the Budweiser and Cleveland Cavaliers' promotion?