Growing up, my family always hosted Thanksgiving at our house. As an only child, this meant that when my extended family left, the leftovers were essentially all mine. Oh, also, my mom has been a vegetarian my whole life, meaning I didn’t even have to share with my immediate family.

Now, as an adult, traveling for Thanksgiving to multiple gatherings means not having the leftovers monopoly I once enjoyed and took for granted. I’d give anything to go back to those halcyon days of not having to share turkey, when turkey sandwiches were just a way of life for a whole week, not a precious, finite resource on par with Wakandan Vibranium or whatever they were mining for on the blue cat planet in “Avatar.”

Someone in Budweiser’s marketing department is a kindred spirit.

The King of Beers is dubbing itself the King of Leftovers this year, thanks to a branded storage container that includes a combination lock so people can guard their leftovers like whatever was in that glowing briefcase in “Pulp Fiction.” 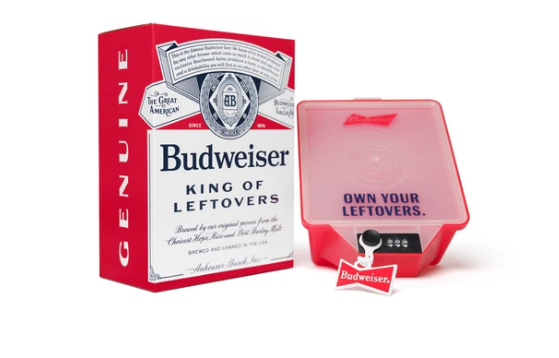 Also, for the actual Turkey Day, Budweiser is releasing a branded turkey stand complete with a beer can, if you feel like cooking some beer can turkey.

“We’re happy to share a new Budweiser spin on the classic Thanksgiving turkey and a Budweiser solve for the best way to store and lock away coveted leftovers,” Monica Rustgi, vice president of marketing for Budweiser, told Adweek. “We hope that Budweiser’s latest offerings will help bring some extra holiday cheer and added fun to both the cooking process and everyone’s favorite Thanksgiving leftovers.”

I’m personally glad to see this, not only because Thanksgiving is my favorite dinner of the whole year and I’m reluctant to share leftovers. Companies too often jump from Halloween to Christmas, forgetting the most delicious holiday of all in the middle.

Don’t worry, there’s plenty of winter holiday stuff on Budweiser's website. They’re also releasing some products for “cuffing season,” i.e. the time of year when people get into relationships for convenience while it’s cold and dark out and there’s nothing fun to do. There’s even a collaboration with another of St. Louis’ favorite sons—Nelly.

Budweiser has also nailed the art of locking things up until an appropriate time, as evidenced by the Area 51 raid and Cleveland Browns-branded locked coolers full of beer, proving that a government cover-up involving extraterrestrial life and a Cleveland Browns winning season were of equal probability.

It's also just another point to back up what we've seen from food and beverage companies, which are turning out some of the most creative branded merchandise and promotional campaigns in marketing right now. We are far past the world where just a T-shirt or a cap is enough to stand out.

But, once again, this story is about Thanksgiving, a holiday too often overlooked in promotional products because there aren’t too many items that automatically lend themselves to the holiday. It turns out Budweiser just had to say what we were all thinking: Thanksgiving isn’t about sharing and togetherness. It’s about staking your claim on what is yours and never looking back.