According to CNN, Caballero has long created bulletproof threads for A-list customers, like Michael Bloomberg, Steven Seagal, King Fernando and, rumor has it, Barack Obama.

"We can say in the past, that many presidents are using our clothing, yes," said Caballero, according to CNN. "But we have a restriction [on saying] the name of many presidents in many countries."

And when Caballero refers to his bulletproof clothing, he's not referring to the typical vest. Instead, he creates formal wear, raincoats, leather jackets and even tank tops, which retail for $1,500. 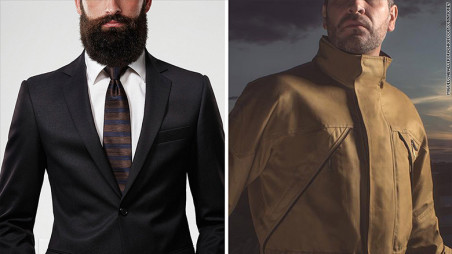 Would you buy these stylish bulletproof looks? (Image via CNN)

"In the case of our VIP clients, like the presidents, they need to reduce risk but also be discreet," said Caballero. "They don't want to show to anyone they are using this type of clothing."

You might be wondering what Caballero's design process is, and how he's able to turn fashionable looks into functional and protective designs. Turns out he puts the apparel to the test himself.

"Several times I've shot my wife, I've shot my lawyer, my brothers, and I've shot myself," he told CNN. "It's in order to get a good quality product."

Looks like Caballero is an interesting man to work for.

With world leaders and even celebrities investing in bulletproof attire, it might be only a matter of time before it becomes accessible to everyone. And now that there are fashionable options available, it would be easy for bulletproof clothing to become an everyday essential, although here's hoping it doesn't need to be.