Burger King has been trying a few new branding initiatives on for size, including taking on Happy Meals with "Real Meals." The company also overhauled its iconic uniforms in 2014 when the chain hired Fernando Machado as its new chief marketing officer. When Business Insider sat down with Machado, he revealed some interesting details about Burger King's employee uniforms, and why they are extra symbolic for the company's past, present and future.

Prior to Machado's hiring, Burger King's employee uniforms were not standardized across the world, but the U.S. franchises mostly featured a monochromatic polyester polo that Machado said was not the most comfortable. Once Machado was brought on board, he decided to standardize the uniform across all global locations.

Now, Burger King's employee uniforms all include a charcoal gray shirt with stripes that are meant to represent the iconic Whopper's ingredients. 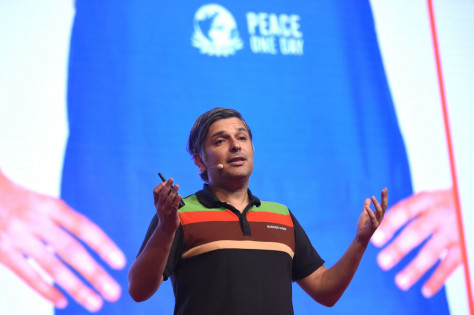 "If you stop someone on the street and ask them about Burger King, what's the first thing that comes to mind? The Whopper," Machado told Business Insider. "So having the Whopper represented in our visual identity is really important."

In case you were wondering, the ingredients represented by the stripes are the bottom bun, meat patty, tomato and lettuce. And the charcoal? That was a calculated move as well, with the gray acting as a nod to the brand's background in flame-grilling.

It turns out the idea for the new uniforms first took off with the Whopper's logo redesign. The stripes first appeared in the "E" in "Whopper," and Machado then decided this design should go further than just the Whopper wrapper.

Once the design was conceived, Machado made sure to survey his employees to determine what technical specifications would make them the most comfortable. It turned out the ideal combination of comfort and functionality came in the form of a cotton-polyester blend with stain-resistant features.

Today, the uniform has expanded to also include a hat, hoodie, apron and an everyday T-shirt, and Machado even wears his uniform to corporate events often.

We don't need to tell you the importance of a company's uniform when it comes to brand awareness, but what Machado did for Burger King is a great example of knowing your brand. Rather than going for something trendy, Machado looked to the company's most iconic symbol to dictate how the rest of the company should operate its marketing efforts. And, he standardized the look across all franchises.

Are You Ready for the Boom?