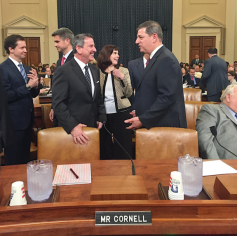 Before today's House Ways and Means Committee Hearing, business leaders aren't taking the chance to let the proposed Border Adjustment Tax (BAT) make its way into law. Namely, the apparel industry has been a vocal opponent of the proposed legislation.

According to Apparel, the Americans for Affordable Products (AAP), a national coalition of more than 500 businesses, retailers and trade associations, launched a campaign site to educate lawmakers on the harmful effects the proposal could have.

The Washington Post also reported that the retail industry was out in full force, with executives from the likes of Target voicing their concern over the proposal's ramifications.

"We, like many others, would be left only with bad options," Brian Cornell, CEO of Target, said in his testimony. He added that Target's tax rate could increase from 35 percent to 75 percent if the proposal is enacted.

It's important to note here that Target is the U.S.'s second-largest importer, and is part of the AAP.

CNBC reported that the Retail Industry Leaders Association (RILA), another group fighting against the BAT, cited a Capital Economics study that claimed the U.S. dollar would need to appreciate by 25 percent in order to offset the tax.

"Like all things that seem too good to be true, it is," the report said, according to CNBC. "There are many reasons to believe that this adjustment is unlikely to occur, especially in the short run, but even over the medium to long run."

RILA spokesman Brian Dodge told CNBC that the tax is "dangerous," and based on "deeply flawed" calculations.

"The report shows the inevitable harm it will cause American families and businesses, and it should give pause to lawmakers considering taking such a gamble with America's economy," he said.

As we reported before, the Border Adjustment Tax had fallen from the top of President Trump's list of top concerns. What's more, Sen. David Perdue (R-Ga.) told The Washington Post earlier this month that he believes the proposed tax is "dead on arrival."

While the retail and promotional product sectors have been vocally against the BAT, it has received support from coalitions of businesses in the manufacturing sector (think Boeing and Caterpillar), which is no surprise.