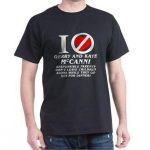 CafePress had been hawking this swipe at the parents of Madeleine McCann. (Image via The Daily Record)

Already dealing with the dilemma of facing declining sales, CafePress took another credibility hit yesterday. The Kentucky-headquartered company, self-dubbed as “the world’s best online gift shop,” announced its U.K. affiliate has pulled merchandise that had been mocking the disappearance of Madeleine McCann, a then-3-year-old whose May 2007 vanishing in Portugal has remained unsolved.

“Thank you for bringing these shirts to our attention,” a website spokeswoman told the Daily Record, the print protagonist in calling into question the entity’s moral fiber. “We agree they are in very poor taste.”

Her statement, which made mention of other merchandise that includes a “Maddie Lives in My Basement” mug, added that the items’ accompanying images will likewise end up removed swiftly. Some of the offensive products, the publication revealed, made their website debuts only a month after the incident.

In what has become a much-discussed matter, particularly since Wednesday marked the 10th anniversary of her separation from parents Kate and Gerry, Madeleine went missing from the trio’s Praia da Luz apartment in Portugal's Algarve region while they dined at a tapas bar. The ensuing decade has bred a few clues, but judging by the lack of compassion from CafePress and Australia’s Redbubble, which in December stopped hawking iPads, stickers and T-shirts that slammed the McCanns as horrible caregivers, it has also yielded considerable disregard for the child.

“I think we’ve seen the worst and the best of human nature,” her father, who on Wednesday had returned to him a hairbrush that investigators had taken a few days into the search, said in an interview with the BBC. “And our personal experience, rather than on the internet, has been overwhelmingly seeing the better side of human nature.”

He and his wife have relied on Scotland Yard for assistance, and called on a memorial service in their hometown of Rothley in England’s Leicestershire county. The same day, around 50 people united in a Portugal church to pray for answers in a case that law enforcement officials have said has yielded critical leads.