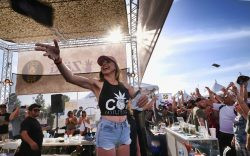 When California voted to legalize marijuana on January 1, 2018, we assumed marijuana merchandise would follow in Canada's footsteps. However, it looks like a new bill being considered in the state Legislature would ban all branded merchandise, according to LA Weekly.

Senate Bill 162, introduced by state Sen. Ben Allen (D-Santa Monica), would prohibit state-licensed cannabis businesses from advertising through branded merchandise. The aim of the bill is to curb children's exposure to cannabis ads, but many view this as a government overstep.

"To ban small businesses from advertising, marketing and branding is ridiculous," said Adam Spiker, executive director of the Southern California Coalition, the largest trade group of marijuana businesses in Los Angeles. "The bill would materially hamstring small business owners' ability to grow in the land of opportunity. We are firmly against and will work to ensure lawmakers are aware of the harmful ramifications it would have."

After passing unanimously in the Senate, the bill is now in an Assembly committee.

Marijuana advertising has been an ongoing issue for the newly legal cannabis market. Currently, advertisements can only be served to audiences that are at least 71.6 percent composed of adults 21 and over. As of now, branded merchandise is under certain restrictions, and distribution is only allowed at industry trade shows or similar events where attendees are required to be over 21.

The new bill would only apply to state-licensed cannabis companies, and not nonprofits or noncommercial speech.

It seems that other states who have legalized marijuana like Colorado and Washington have similar restrictions, but theirs are more clearly outlined.