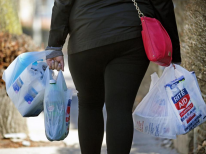 Starting today, people will need to start bringing their own bags to Cambridge grocery stores as part of its Bring Your Own Bag (BYOB) ordinance. Paper bags will be available, but at a price, CBS Boston reported.

The goal is to encourage shoppers to bring reusable shopping bags to cut down on waste, but not all shoppers are enthused.

"It is kind of a drag to bring the bags, but I think people will adjust," one Cambridge shopper told CBS Boston.

Shoppers also are upset that they have to pay for paper bags, especially since all of the profits from paper bags go to the retailers. However, three Whole Foods locations in Cambridge reportedly will donate the money they collect to a local nonprofit called City Sprouts, which provides sustainable gardens to schools in Cambridge and Boston.

This is the latest in a wave of cities and towns working to encourage consumers to use reusable items. Other cities have worked to ban single-use water bottles. Earlier this month, the mayor of Montreal brought up the idea, and immediately was met with opposition from major beverage brands, like Pepsi and Coke.