Now more than ever, reusable water bottles are a must-have item everywhere we go. But, not all reusable water bottles are created equal. They all serve the same purpose, but there's a lot more than functionality that goes into whether an end-user likes their water bottle. They've become a fashion item of sorts, and trends dictate which design people will want. Right now, there are a lot of the steel bottles that taper in at the top, reminiscent of single-use bottles or old soda bottles.

But another reusable water bottle trend might be coming back to reclaim the top spot.

New York Magazine predicted that camping-style bottles, like Nalgene, are back in a big way. These are cylindrical bottles with screw-top lids and measurement markings on the side. 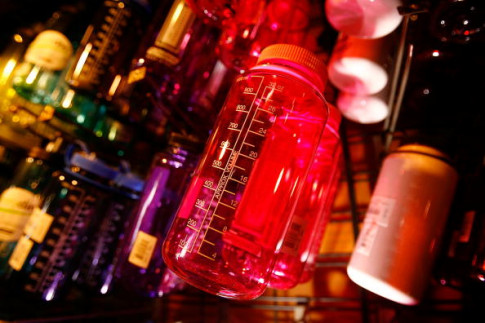 While other brands have jumped on the stylish water bottle bandwagon, the next status bottle is not so status-y at all. Like fanny packs and Carhartt beanies, utilitarian Nalgene bottles—an old favorite of hikers and outdoorsy folk—are seeping into the ranks of the fashionable.

These had already had a heyday, and with the nostalgia shifting from '90s to early '00s, it makes sense that the spotlight is back on them.

Amanda Mull from The Atlantic writes:

The first time I coveted a water bottle was in 2004. When I arrived as a freshman at the University of Georgia, I found that I was somehow the last person alive who didn’t own a Nalgene. The brand’s distinctive, lightweight plastic bottles had long been a cult-favorite camping accessory, but in the mid-2000s, they exploded in popularity beyond just outdoorsmen. A version with the school’s logo on it cost $16 in the bookstore, which was a little steep for me, an unemployed 18-year-old, but I bought one anyway. I wanted to be the kind of person all my new peers apparently were. Plus, it’s hot in Georgia. A nice water bottle seemed like a justifiable extravagance.

“With millennials, fitness and health are themselves signals,” Tülin Erdem, a marketing professor at NYU, told The Atlanticl. “They drink more water and carry it with them, so it’s an item that becomes part of them and their self-expression.”

If you go into any yoga studio or gym right now, you're likely to see one of the slimmer, tapered bottles. That extends beyond the fitness world, just as athleisure clothing extends beyond, too. There's one of those bottles literally next to me on my desk as I write this.

Rapper Travis Scott made that wide mouth bottle the official branded water bottle for his Astroworld tour. And, according to the New York Magazine article, its popularity is part of a larger growing trend called "gorpcore."

Don't feel out of the loop. I, a bona fide millennial, had to Google "gorpcore." It's basically the trend of "norm core," i.e. not super-high fashion clothing, but with an emphasis on the outdoors and camping. Think about all of the Patagonia, Carhartt and North Face gear you see around. This water bottle fits into that. Even if they're nowhere near a forest, the kids are looking for stuff that makes them look like they're prepped to do the whole Appalachian Trail.

So, while yoga-inspired and more delicate water bottles and clothing will still be in fashion for a while, it might be time to start looking into these more utilitarian choices in drinkware and even apparel.