Can Under Armour’s New President Revive the Slumping Apparel Seller? 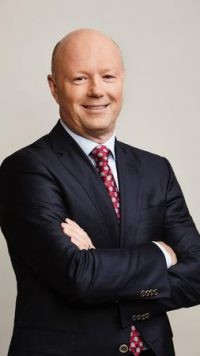 Patrik Frisk will officially become Under Armour's president and chief operating officer on July 10. (Image via Under Armour/Baltimore Sun)

What would you do for $1 million? Would you risk your reputation to try to uplift a profitable yet slumping company, or would you shy away from the pressure and guaranteed scrutiny? On Tuesday, Patrik Frisk chose to challenge himself and his track record as a savvy businessman, with founder Kevin Plank announcing the 54-year-old will assume the roles of president and chief operating officer for Under Armour.

“Patrik’s global experience in brand building, including a proven and disciplined record of driving growth, while enhancing profitability and efficiency, will be instrumental as we work to transform our business model to deliver long-term value for our consumers, customers and shareholders,” his new boss said of the Swedish-born figure who will commence his tasks July 10. “The opportunity to leverage our strengths—innovative product, brand strength, premium sports marketing assets and unparalleled consumer connections—within an increasingly more digital ecosystem has never been greater."

The summer hire will look to help the Baltimore-based entity to sizzle, as he has relied on his regard for entities’ economic growth to serve as chief executive officer of The Aldo Group, his most recent employer; vice president and general manager of The North Face; coalition president of outdoor Americas and president of the Timberland brand and outdoor and action sports for VF Corp.; and co-founder of Lager 157, a retailer situated in his Scandinavian homeland. Though Under Armour has landed a significant number of sponsorship agreements, including deals with such superstars as Golden State Warriors guard Steph Curry, New England Patriots quarterback Tom Brady and gold medal-winning alpine skier Lindsey Vonn, the 21-year-old behemoth has experienced some financial pain that has threatened to bring it to its knees, including the April news that it had suffered its first quarterly loss since its 2005 beginnings as a public company.

Securing Frisk ends a two-year hiatus without a chief operating officer for Under Armour, which, since 2016, has hawked footwear as a complement to its sports apparel options. Thanks to his extensive background with the former, the Montreal resident, who, following his March departure from Aldo, joined the board of directors for Gildan, which makes and markets Under Armour socks in the United States, will strive to guard against the continuing ascent of Nike and Adidas. Given the severity of the competition among the three, Frisk, industry experts say, must quickly mesh with Plank, who will remain Under Armour’s chairman and chief executive officer, and his other peers to retain its base and attract additional consumers.

While calling a company that rakes in billions “a sleeping giant” might be a stretch, the success that Nike and Adidas have registered of late just might serve as the impetus that helps Under Armour shake off its relative financial fatigue and prove vibrant yet again. Perhaps Frisk can implement concepts that nobody affiliated with Under Armour has ever entertained. For a million smackers, one thing is for sure—the impending president had better be ready to put one foot in front of another.

How to Set Up a Company Store for Your Client

Party Time: The Unconventional Way One Distributor Celebrated Its 30th Birthday (and the Lessons It Learned Along the Way)
Comments
The Top Lists