Can You Copyright a Tweet? Frank Ocean's T-shirt Designer Will Find Out

When Frank Ocean performed his set at the Panorama Festival in New York, his T-shirt went viral. The T-shirt read, "Why be racist, sexist, homophobic or transphobic when you could just be quiet?" The internet loved the T-shirt, and everyone wanted to know where they could buy their own version. 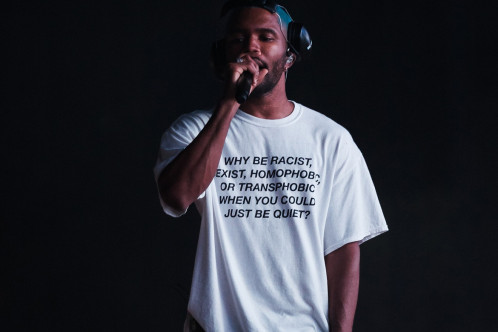 It turns out -year-old Kayla Robinson created the T-shirt for her online company, Green Box Shop. However, the origin of the phrase is a little more convoluted. Eighteen-year-old Syracuse resident Brandon Male originally tweeted the phrase two years ago. After Ocean's performance, Green Box raked in thousands of orders, but Male was left without any compensation or credit, leaving many people to wonder if tweets can be considered intellectual property.

According to the New York Times, Male reached out to Green Box when he first learned about the shirt, but he was dismissed.

“They told me I needed to calm down and said they credited me on Instagram one time,” he said. “I ended up letting it slide after that.”

Robinson is claiming she did not handle her company's social media when that message was sent, so she was not aware of Male's claim.

So, the question remains: Do you retain ownership of your tweets?

“People will often take images they find online and reproduce them because they think they have the right to," said Christine Weller, associate at Griesing Law, to the New York Times. "But that’s not the case. It’s generally not permitted without the permission of the copyholder.”

She continued on to say that copyright is an opt-out system, which means your tweets are yours unless you specifically allow others to use it.

To make the issue go away, Robinson sent $100 to Male over Venmo, which equates to less than 1 percent of the revenue Green Box earned over the two days after Frank Ocean's performance. To Male, this was more of a slap in the face.

Now, Robinson has reached out to Male to settle the ongoing back-and-forth, so we will see how this issue resolves itself.

Moving forward, be extra careful where you source your apparel ideas from, or you could end up in the middle of a legal copyright battle.