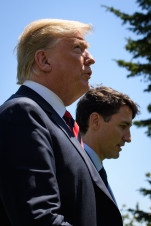 Until recently, the narrative surrounding the new tariffs has been that some items are tangentially related to the promotional products industry, and that was a cause for alarm, but not outright panic. However, the newest rounds of retaliatory tariffs from Canada announced yesterday list at a few items with direct ties to the promotional industry, like ballpoint pens.

"Taking into consideration feedback received from Canadians through over 1,000 submissions during public consultations, on July 1, 2018, Canada will impose countermeasures (surtaxes) against C$16.6 billion in imports of steel, aluminum and other products from the U.S., representing the value of 2017 Canadian exports affected by the U.S. tariffs."

The tariffs on steel products will be at a 25 percent rate, and everything else will be at 10 percent.

Companies that specialize in products on the list, like New Jersey-based Campbell Soup, expressed their concern over the tariffs.

"With a 10 percent tariff on soups and broths and tomato products—representing the core of Campbell's products that are sold in Canada and made from both U.S. and Canadian ingredients—Campbell estimates the economic impact to our Canadian business to be significant," a Campbell spokesperson told CNBC.

"As a global food company, Kraft Heinz opposes trade policies that impose taxes or tariffs on our products," Kraft Heinz spokesperson Michael Mullen told CNBC. "NAFTA has been in place for more than 20 years, and we have developed supply chains that run across North America."

The trade hostility comes during a period of uncertainty for NAFTA, with conversations between the three nations' leaders alternating between productive and heated. Mexico just elected it's new president, Andres Manuel Lopez Obrador, who said on Monday that he would work to maintain NAFTA, according to Reuters.

Related story: How the Tariffs Impact the Promotional Products Industry: A Quick Update

As Tariffs Loom, PPAI Pushes Back Against 'Harmful' Legislation