As 2019 approaches, Canada’s two main political parties, the Liberals and Conservatives, are gearing up for victory with ... socks? That’s right, you heard me correctly. Socks.

While I’m slightly envious of such an innocuous political environment (relative to our own, of course) I have to say that I’m more envious of Canadian voters due to the fact that I love socks. Colorful socks, patterned socks, quirky socks—they just make me happy, ok? They’re an understated, classy way to add some flash to any outfit.

And you know who else loves socks? None other than Justin Trudeau, Canada’s highly popular young maverick of a Prime Minister, which means that I’m in good company, thank you very much. 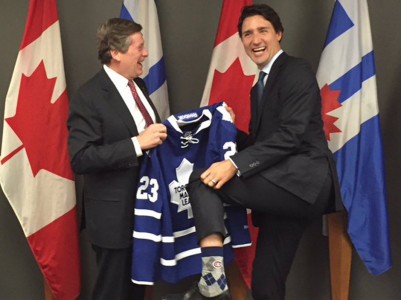 In order to take advantage of Trudeau’s known foot apparel affiliation, the Liberals ran a mock campaign last week between three personified promotional products. The socks claimed victory over the toque and mittens with over 50 percent of the vote (for the uninformed, myself included, a toque is just a knit winter hat). The fundraising effort sought to establish the most popular item amongst Canadian voters just in time for the holidays.

In response to the Liberals’ campaign, itself a part of their larger “2019 Re-election Fund,” the Conservatives have decided to release an opposing branded-sock, dubbed “Andrew Scheer’s Dad Socks” after the party’s leader. Time will tell if this move will gain the Tories a significant foothold before 2019 is upon us, though I will say that these socks, despite the obvious satire, are pretty lame. I am a firm believer that white socks are only acceptable at the gym, so maybe I’m biased. Some, however, might say that I have style.

While merchandise has long been a staple in U.S. elections, especially during the last cycle, it’s interesting to see two parties competing with a specific type of apparel in clever, satirical ways. Whether or not this will have any actual impact on the 2019 elections is up to the voters, of course. And though I’m not Canadian (alas) I have to pledge my support to the Trudeauean efforts, if not for the clever mock-vote campaign, then at least to preserve the honor of sock-enthusiasts everywhere.