Look, we're going to lay a truth bomb on all of you guys right now. Apologies if it blows your minds.

Wait, what's that? You guys knew that already. Well, unfortunately, no one told the St. Louis Cardinals that before they sent out an ill-advised tweet about a stadium giveaway that critics are calling sexist.

According to Sports illustrated, the team tweeted out an image advertising the 1967 World Series Championship replica ring it will give out on MAy 17 with the caption "You love baseball, she loves jewelry. On May 17, it's a win-win." 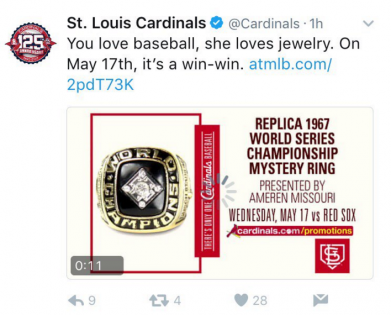 The Cardinals didn't think this tweet through. (Image via Sports illustrated)

The team appears to have deleted the tweet in favor of a more neutral advertisement. But, naturally, internet snark appeared.

Are boys allowed to win the ring? I was under the impression sportz are for boys and sparkly things are for girls?

It's not the first baseball promotion that has made women feel out of place. According to Fox Sports, the Houston Astros advertised their Ladies Night promotion by saying that women can "learn about baseball" at the park.

Think Progress published a pretty comprehensive history of times baseball teams have marginalized women through promotions. While it might be inadvertent, such as through female-centric offerings like wine glasses or ladies' fashion, some people feel like they're making women at the ballpark an idiosyncrasy, or implying that teams need to do something special to get them to come (other than just playing a baseball game, which presumably is good enough for men).

Through all of the brainstorming and promotions and slogans, it’s mind-boggling that one simple fact never seems to sink in: women like sports. They’re baseball fans. In fact, according to various estimates in recent years, women comprise around 45 to 47 percent of MLB fans — more than any of the other big four sports. Women are beat reporters, following teams from city to city and analyzing all 162 regular season games. They earn college scholarships to play baseball with guys and, at just 13 years old, throw 70 mile-per-hour fastballs.

So, Cardinals, while the replica ring idea is a great giveaway that the team should be proud of, maybe think a little bit harder next time about how you appeal to everyone.

Cleaning Out the Sales Closet